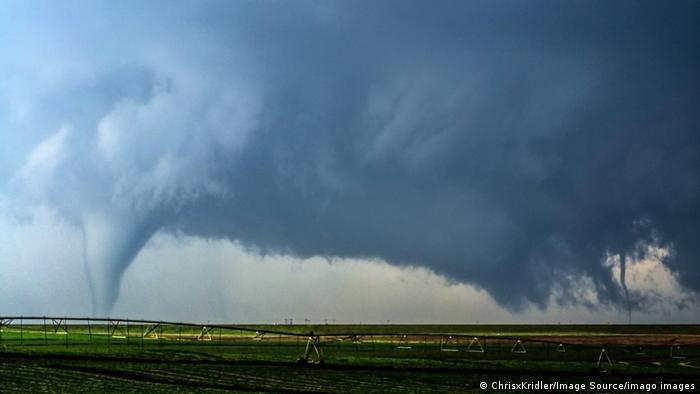 Supercell thunderstorms can produce more than one tornado at a time

Tornadoes can be terrifying — whether you experience them or only see images of the aftermath.

Most tornadoes are harmless and brief. But when a tornado falls outside the norm and collides with humans, it can cause severe damage and even death.

That is what happened when a series of tornadoes hit the United States in early December, leaving a trail of destruction from Arkansas to Kentucky. Dozens of people were killed and many are still missing.

The US National Weather Service described one of the tornadoes as "potentially historic" — due to it possibly being on the ground for the longest distance on record.

How does a tornado form?

Scientists know the basic ingredients for a tornado, but they are still trying to work out exactly what causes them.

Ashley is — what you might call — a storm chaser.

"I spend about a month and a half out of the year chasing these weather events, and they never want to [turn into a tornado] when I'm sitting there," Ashley told DW.

Tornadoes form in very specific weather conditions. It usually starts with a kind of rotating thunderstorm called a supercell. A supercell can bring lightning, strong winds, hail and flash floods.

If the wind speed and its direction are different at different altitudes, you can then get a "wind shear."

Wind shears are often harmless but they can cause air currents to spin and create a horizontal tube of air. That's common in supercell thunderstorms, but it's not a tornado yet.

Sometimes a storm will suck up that tube of air until it becomes vertical. And when that happens it's called a mesocyclone.

That's still not a tornado. For a tornado to form, there also needs to be spinning air near the ground.

The stronger the tube of air rotates, the closer it can get to the ground and the more likely it is that it will turn into a tornado. Ashley says: Think of it like a figure skater.

When that happens, gusts of warm air rise and gusts of cool air sink, blowing across the land. If there are enough rising and sinking gusts, the air near the ground starts spinning.

Once it's vertical, the tornado becomes darker. It picks up dust, debris and anything else that gets in its way. A really intense tornado will pick up cars, animals and even houses.

Why are tornadoes hard to predict?

Spring is considered to be tornado season in the US, but it can strike at any time, such as the ones in December 2021.

But they are hard to predict because compared to other extreme weather events, tornadoes are relatively small. That makes them difficult to observe.

"If we think about all the different hazards we have like hurricanes, droughts, floods, tornadoes might be one of the smallest," says Ashley, "even the most violent tornadoes are, at most, a half-mile (800 meters) wide — they occur typically in the order of seconds to minutes."

So, tornadoes often occur below particular levels that researchers generally use for observing, modeling and predicting weather events. Scientists can simulate tornadoes using computers, but "it requires an immense amount of computing power," says Ashley.

It's important to be able to predict extreme weather events so that authorities can issue warnings and give people a chance to get to safety. So, what do they do?

To issue warnings, scientists look out for supercell thunderstorms and use radar technology to measure how fast the mesocyclone is rotating. The faster it's rotating and the closer it is to the ground, the more likely it is that it will turn into a tornado.

"A majority of the storms and tornadoes [we observe] are on the cusp, like a storm is rotating like crazy in the mid-levels, but just because it's rotating up there doesn't necessarily mean it's going to come to the ground," says Ashley.

But researchers "don't have very good observations in the lowest levels of the atmosphere," says Ashley, and that seems to be a critical piece in the puzzle."

How does climate change affect tornadoes?

"As it relates to climate change, we know that some of the fundamental ingredients that [contribute to] severe thunderstorms and go on to produce hail and tornadoes are increasing," says Ashley.

And the modeling shows that that is particularly true in the United States, but it may also be happening in the UK and Europe.

Andy Beshear said the death toll had now increased to "74," but more than 100 people remain missing after a series of severe storms ripped through Kentucky over the weekend. Thousands still lack heat or water.

Kentucky is 'ground zero' in the aftermath of deadly US tornadoes

Dozens of people have been killed and hundreds are still missing after several tornadoes tore through six US states. The deadly winds have flattened entire factories and destroyed thousands of homes.

'This event, in all respects, was off the charts': Meteorologist Matthew Cappucci

More than 33 million people in Pakistan have been hit by floods. But they are not an isolated event. South Asia has seen periods of extreme heat, followed by heavy rains. And most of these events are occurring more regularly and with greater intensity.