The European Union and the US have lifted their economic sanctions against Iran. The decision comes after the UN atomic watchdog announced that Tehran had complied with the terms of last July's landmark nuclear deal. 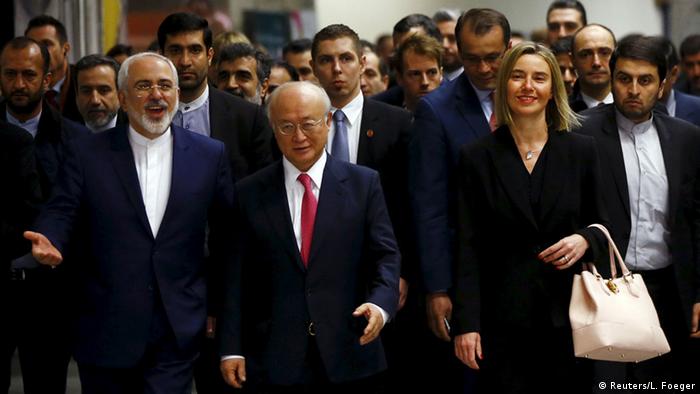 "As Iran has fulfilled its commitments, today multilateral and national economic and financial sanctions related to Iran's nuclear program are lifted in accordance" with the July deal, Mogherini said, adding that the deal was "strong and fair."

Shortly after the press conference, US Secretary of State John Kerry confirmed that Washington had also lifted its sanctions against Iran.

"I hereby confirm that the International Atomic Energy Agency has verified that Iran has fully implemented its required commitments," he said. "The US sanctions-related commitments ... are now in effect."

US President Barack Obama signed an order annulling previous executive orders that imposed further sanctions beyond the scope of the congressional sanctions.

The total worth of the US and EU sanctions is an estimated $100 billion (91.6 billion euros).

The announcements on Saturday came after the UN's nuclear agency, the International Atomic Energy Agency (IAEA), confirmed that Iran had met commitments it made in last July's landmark nuclear deal with six world powers.

The IAEA said its "inspectors on the ground verified that Iran has carried out all measures required under the [July deal] ... to enable Implementation Day to occur."

The implementation of the nuclear deal was met with mixed reactions from government ministers around the world. Iranian President Hassan Rouhani turned to Twitter to praise the outcome:


British Foreign Secretary Philip Hammond also hailed the deal's implementation, describing it as an "important landmark" that made the "world a safer place."

"The nuclear deal with Iran, in which Britain played a major role, makes the Middle East and the wider world a safer place," Hammond said in a statement.

Democratic presidential candidate Hillary Clinton, however, urged the US to impose new sanctions on Tehran over its ballistic missile testing program. As former secretary of state, she had a role in previous negotiations with Iran and said if she were elected president in November, her approach to Iran would be "to distrust and verify."

Ahead of the lifting of sanctions, Iran's semi-state ISNA news agency also announced earlier on Saturday that four Iranian-American prisoners had been released: Jason Rezaian, Saeed Abedini, Amir Hekmati and Nosratollah Khosravi as well as a fifth American national.

The United States has also reportedly freed seven Iranian-Americans who were held on sanctions-related charges.