West African Christians say they are ′marginalized′ during Ramadan | World| Breaking news and perspectives from around the globe | DW | 23.04.2021

West African Christians say they are 'marginalized' during Ramadan 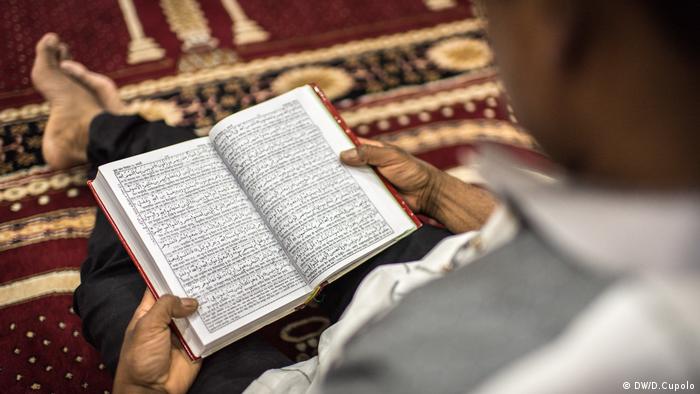 For centuries, Muslims and Christians have lived side by side in Muslim-majority countries like Guinea and Gambia, with joint celebration of religious feasts, and even intermarriages, taking place from time to time, says DW's Omar Wally.

However, as the Muslim holy month of Ramadan unfolds, reports indicate that Christian minorities in these two West African nations are complaining of increasing marginalization.

Prior to Ramadan this year, the Gambian government passed a controversial bill that cut the daytime working hours of female civil servants during the holy month.

The decision was made to allow the women to return home and prepare meals for their families to break their fast in the evenings.

The move came just two weeks after the end of the Christian festival of Lent, which has left some Christians in Gambia questioning why they were not afforded a similar accommodation .

"Why issue such a memo in Ramadan when we just concluded our Lenten season nearly two weeks ago and such a directive was not issued," said Gomez.

"Christians were fasting — you have lot of Christian female in civil service in the government. If you ask me that is really illogical."

Not every Christian shares Gomez's view, however.

Lawyer Melvin Robertson Roberts — who is also a practicing Christian — challenged the comparison between Ramadan and Lent, and advocates for different treatments for the two feasts.

"The dynamics and regime of the Christian Lent is radically different from Muslim holy month of Ramadan. I don't think the two are the same and should be treated as such," the legal expert told DW.

While it appears easy to make the distinction between the two customs in Gambia, where there are official policies in place, the same does not appear to be the case in Guinea.

In Conakry, the country's capital, concerns have been raised over the expectation of a conservative dress code.

While many women choose to cover themselves from head to toe as they observe Ramadan, non-Muslims who continue to dress as they normally would, have been reported to suffer public humiliation and discrimination.

"When you wear skirt or trousers during Ramadan you're treated like a call girl by the public," said Josephine Kamano, a non-Muslim.

"You are humiliated and even denied access to some places. Everyone has his or her religion. I am not a Muslim, so it is not obligatory for me to dress like a Muslim. It is their fasting, not mine."

In Guinea where about 85% of the population identifies as Muslim, the conservative dress code is not official law, but most people respect it during Ramadan as a matter of convention.

"I am a Muslim woman, so I need to dress properly and cover my head to my toes. Because the month of Ramadan is a holy month, and we must respect it," 22-year-old Hawa Cisse told DW.

"For God to forgive our sins, all other girls and woman must do the same, whether you are a Muslim or not," said 22-year-old Hawa Cisse."

This approach is shared by many Guineans who still hold conservative attitudes around women's dress codes and even believe women are more likely to experience sexual harassment if they are dressed indecently according to the Quran.

But Bakari Arabi, a London-based Islamic scholar said the practice is wrong.

"That practice has no place in Islam, it contradicts the tenets of the Quran," Bakari told DW.

"Islam is against mistreatment of any human being, Islam has commanded Muslims to be respectful abstain from discrimination and, to uphold the dignity of Allah. Non-Muslims are not required to abide by the rules that are meant for Muslims."

The changes in Guinea are not limited to female dress codes, as other areas of social life are also impacted. Bars, nightclubs and restaurants are closed to the public across the country, affecting people, such as civil servants.

"As you can see there is nothing here to eat. It's exactly the same everywhere in town since 8 a.m. I have been looking for food," said Joseph Kamono.

"We are not Muslims, so they don't need to deprive us of our right to food because of the month of Ramadan."

The advice given to all Guineans — to avoid eating or drinking in public during the day until May 12 — does not pose a problem for Muslims, but, according to Bakari, it is a source of inconvenience for many non-Muslims.

"If a Christian lives in any Muslim-majority country, Muslims should not force them to follow their religion ... Allah says Islam is not a compulsion religion, you can't compel anyone to enter into your religion, if you someone into the religion under duress, it is not even acceptable by Allah," Bakari said.

For Muslims, in both Gambia and Guinea, the month of Ramadan is one of the holiest times of the year. It is considered a time of reflection, self-improvement, and heightened devotion to Allah.

For Gambia — which maintains a secular constitution — the situation is a little more complicated.

That same year, he declared Gambia an Islamic Republic, although this decision was later reversed by his successor, President Adama Barrow.

Despite not being an official Islamic Republic, the current Gambian government is still discriminating against Christians in the country, according to US-based rights activist Pa Samba Jow.

This position is cautiously supported by Dr. Bakari Arabi who asserted: "This is a policy made by a sovereign government, but talking from Islamic perspective, that is not right."

To him, "Quran has made it clear that Muslims should be good and kind to everyone and treat fairly those who are non-Muslims as long as they treat you also fairly."

While the Gambian government's decision has caused a stir in the country and beyond, conservative Muslims have extolled lawmakers for the reduced working hours.

Some have argued that the memo is not discriminatory as it referred to female civil servants with no mention of religion, meaning that Christian workers will also be allowed to go home early.

Karim Kamara and Omar Wale contributed to this article