The Nigerian army has recently stepped up its fight against Boko Haram. Meanwhile leaders of Togo and Benin visited Niger, to express their solidarity in the struggle against the group. So could this be a turning point? 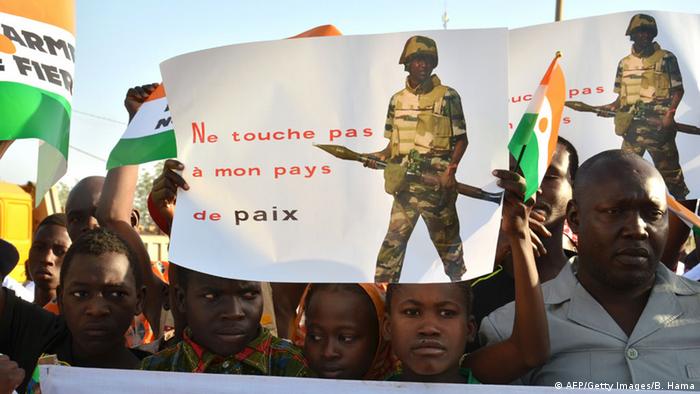 The placard from a protest in Niger reads:"Hands off my peaceful country".

"Each time one of us is attacked, all of us are being attacked", Niger's President Mahamadou Issoufou told reporters in the country's capital Niamey. Togolese president Faure Gnassingbe and Benin's president Thomas Yaya Boni visited Niger on Tuesday (24.02.2015) after militants attacked the Nigerien town of Diffa in southeastern Niger in early February, which lead to protests in Niamey. The two leaders voiced their solidarity with countries affected by the insurgency. Benin's president also declared that the need to fight Boko Haram was clear and was not up for discussion - it was a serious issue that needed to be addressed.

The African Union (AU) mandate to fight Boko Haram combines the forces of Nigeria and its neighboring countries, Chad, Cameroon, Benin and Niger, which have pledged 8,700 troops towards the regional effort against the group.

Nigeria's former military ruler General Ibrahim Babangida underlined the importance of the African Union force in an interview with DW's correspondent, Uwais Abubakar Idris: "With multinational force, by the grace of God, the battle is going to be successful. It is not Nigeria's problem alone, because whatever affects Nigeria also affects its neighbors."

On Tuesday a mine, supposedly planted by the militants, killed two soldiers in Niger. Similarly Cameroonian and Chadian troops have repeatedly fought off militants who crossed their borders. 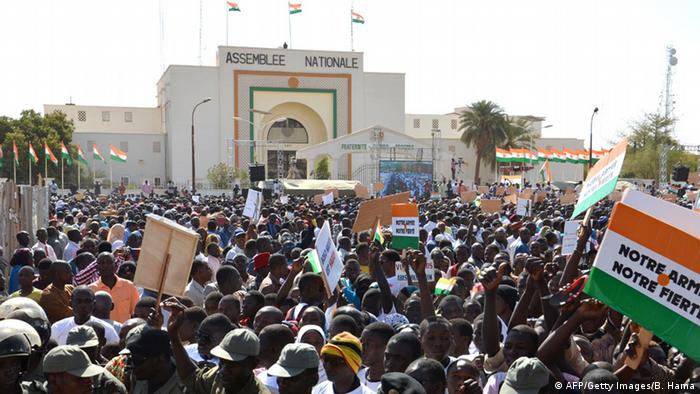 Residents of Niger demonstrated in Niamey after attacks by Boko Haram.

Jesper Cullen, an analyst with the UK-based Risk Advisory group thinks that the regional meetings will not bear much fruit. "The Nigerian government has allowed Chad and Cameroon into Nigeria, but this has mainly been along the border and it appears that the government in Nigeria is reluctant to admit some sort of failure by allowing foreign troops in," Cullen told DW. He believes that this might change if the opposition were to win the upcoming elections, but that the chances that this will happen are relatively slim.

Having given their own backing for a multinational anti-Boko Haram force, AU leaders are also seeking a mandate from the UN Security Council in the hope ofgaining both financial and logistical support. On a visit to West Africa, French Foreign Minister Laurent Fabius said that France was willing to support the AU's bid. "France's support for the integrated African reaction force is total," Fabius told reporters in Niger's capital Niamey. Fabius also praised Nigeria for stepping up its military efforts against the rebel group.

According to Cullen there is a large international interest in supporting the fight against Boko Haram. The question is whether AU and international efforts will simply protect Nigeria's neighboring countries in order to contain the terrorist activities, or whether they will actually make headway in Nigeria itself. "The Nigerian army is much larger than [the AU force] and has a huge military presence in the northeast, but has really struggled to fight Boko Haram," explains Cullen. Small countries like Togo and Benin, could only contribute a fraction of such a presence to the international effort.

In recent weeks, Nigeria's army has claimed a series of victories against the Boko Haram Islamists. This follows the postponement of elections on the grounds of insecurity in Nigeria's northern states. The army recaptured key towns such as Baga, which lies on the shores of Lake Chad and where hundreds or possibly more people were killed in early January. Both Baga and Monguno, another town that was recaptured, have military bases.

But the military has failed to stop the frequent suicide bombings. On Tuesday a teenage girl blew herself up at a crowded bus station in the town of Potiskum, killing at least 16 people and wounding over 50. A few days earlier, a suicide bomber, no older than 10, killed herself and four other people in the same town.

Manji Cheto, a security expert from the London-based group Teneo Intelligence, admits that there has been a significant upturn in the counter-insurgency efforts, and lists two contributing factors. “The equipment that the military has been requesting for has now actually reached soldiers on the frontline,” says Cheto. “The second thing is the multinational force that has finally been assembled has actually helped to intensify the counter-insurgency efforts.” She says that both Nigerian and international experts initially underestimated the capabilities of Boko Haram. "I think it boils down to resting on the laurels of the country's military and not understanding that the threat was much bigger than the intelligence suggested at the time.”

Cheto believes that the proximity to the elections, which are now set for March 28, 2015, is the main cause for this change. She also says that while she does not believe that Boko Haram will be quashed in the near future, the military hopes to create safe zones in the crisis hit states of Borno, Adamawa, Yobe and Jigawa, so that polling can be conducted there. If the momentum of the counter-insurgency with international support continues, says Cheto, there could be a glimmer of hope in the fight against the terrorists.

Boko Haram's violent campaign in Nigeria killed at least 10,000 people last year, according to the Council on Foreign Affairs. The crisis has forced at least 1.6 million to leave their homes and seek refuge both in Nigeria and across its borders in Chad and Cameroon.

Stranded near the Nigerian border: a visit to the Minawao refugee camp

Every day people from Nigeria's restive northeast flee over the border into Cameroon. The Minawao refugee camp on the Cameroonian side is bursting at the seams. DW's Moki Kindzeka met some of its residents. (23.02.2015)

Explosions have ripped through bus stations in two cities in northern Nigeria, Kano and Potiskum, where at least 15 people were reportedly killed. There have been no immediate claims of responsibility. (24.02.2015)