'We have a real hoverboard'

When Oliver de Haas was asked to develop a hoverboard like the one in the movie "Back to the Future II," he was thrilled. In a DW interview, he explains how his floating skateboard - called "Slide" - works. 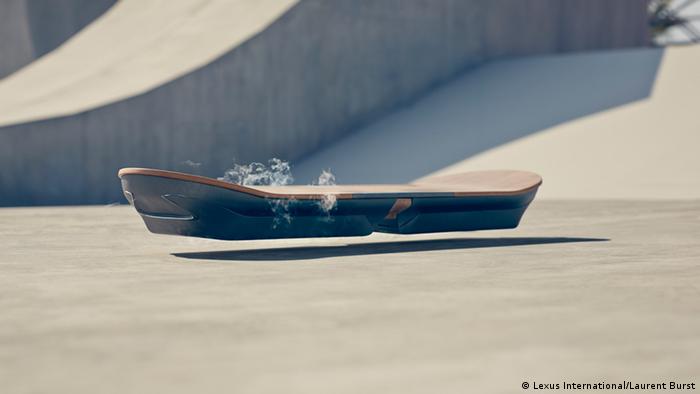 DW: In a commercial, Lexus - the luxury vehicle division of Japanese automaker Toyota - presents a hoverboard, just like the one we know in the movie "Back to the Future II." In the video skateboarders float with their hoverboard over an obstacle course and over water. Your company Evico in Dresden took part in developing this floating skateboard. How did it happen?

Oliver de Haas: Lexus wanted to build such a hoverboard and was looking for partners who would realize this technology. Their collaboration with a US company wasn't quite successful, so this company contacted us. We have worked before in the field of magnetic levitation, and we have a SupraTrans test track for a floating vehicle since 2009. 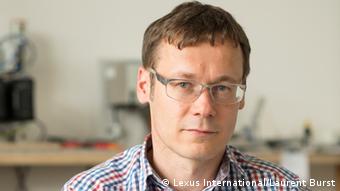 Anyway, the first tests with the Lexus team looked promising. That was a year and a half ago.

How does the hoverboard work?

The hoverboard contains supraconductors, a material which has no electric resistance at very low temperatures, i.e. at -200 degree Celsius or even less. Under those conditions, supraconductors repel materials with magnetic fields.

So you need a magnetic field to be able to float?

Yes, absolutely. This magnetic field is generated by a magnetic rail, which Lexus had placed underground in its hoverboard skating park in Barcelona - the one you saw in the video.

And this repulsion makes the board float over the rail?

It is not until, the supraconductors cool down that they become supraconductive and repulsive. Still, the magnetic field is not being repelled because it was there during the cooling down period - that's how it becomes somehow frozen inside the supraconductor.

If you try to move the hoverboard out of its current position, the magnetic field would bend. That is disadvantageous from an energy perspective.

That means that the board keeps on wanting to go back to the position it had when the supraconductor changed from warm to cold. If we take away the spacer bar between board and rail, the hoverboard starts to float. It doesn't want to go in any other direction, either closer to the rail nor farther away nor sideways.

But then it won't move at all, will it?

Only along the rail, because here the magnetic field is constant. That means, moving along the rail is possible without any resistance or friction. That's how the skaters float on our hoverboard.

Had you watched "Back to the Future II" before Lexus asked you to build a hoverboard?

Of course I watched the trilogy. But I wouldn't say that I was totally inspired by the idea of a hoverboard back then. But when Lexus suggested the project, I remembered the movies - and yes, I was thrilled.

People discuss on the internet how good our hoverboard is compared to the one in the movie. That is quite unfair, I think. In making the movie, the hoverboard was attached to a crane and could do things that are completely impossible from a physical point of view. We, however, show what we can realize in the near future. Our board is a real hoverboard, even though it is of course different from the one in the science fiction movie.

What comes next? Can anybody buy a hoverboard soon?

According to Lexus, that was a one-time project; no further steps are planned. Evico is thinking about turning it into a salable product. But even if we do that, it won't be affordable, I am afraid. You need a piece of magnetic rail placed into the ground - that alone is not feasible for a private household. And then you would need the board itself with its costly materials. So I am afraid there won't be a hoverboard for everyday people in the foreseeable future.

Oliver de Haas is a physicist and CEO of the company Evico, which runs a test track for supraconductor vehicles in Dresden.

October 21, 2015 - a day once thought so distant as to hold near-infinite technological promise. Now that it's here, social media fans throughout the world are celebrating our failure to live up to our own expectations. (21.10.2015)

A nostalgic look back at the future