The Polish government plans to strip the late communist-era head of state General Wojciech Jaruzelski of his military rank. While largely symbolic, the move is part of the government's attempts to rewrite Polish history. 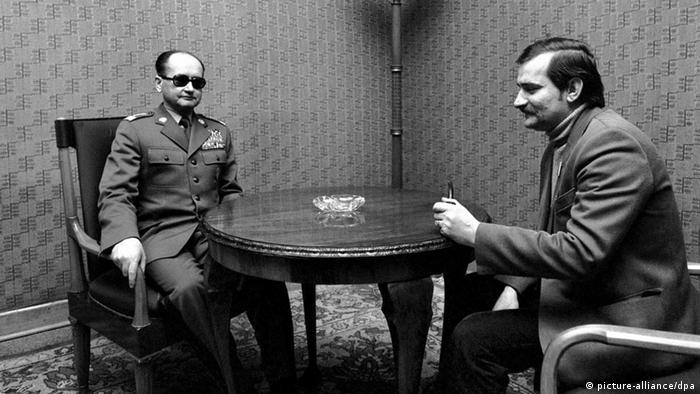 Defense minister Antoni Macierewicz said on Tuesday he wanted to inform all Poles that "today, for the last time, will the word 'general' be used alongside the name of Jaruzelski by any official with the Ministry of National Defense."

"Criminals responsible for armed action against their own nation do not deserve to wear these military ranks," Macierewicz said. 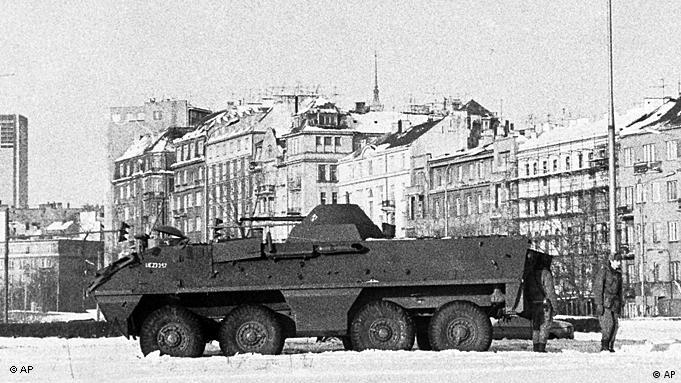 An armored Polish army vehicle stationed in Warsaw in 1981

The ruling party, Law and Justice (PiS), came to power in October 2015 on the back of promises to punish senior figures from the communist era, which lasted in Poland from 1948 to 1989.

PiS has also made plans to scrap monuments to the Red Army in Poland, a move that had drawn fierce criticism from Moscow.

Government ministers have also attacked a US historian who claimed Poles were at least partially culpable in the murder of Jews during the war.

All this is set against the backdrop of ongoing claims the Russians were behind a plane crash in 2010 at Smolensk in Russia that killed then president Lech Kaczynski, the twin brother of PiS leader, Jaroslaw.

The party's apparent fixation with the crash and conspiracy theories implicating the Kremlin are also juxtaposed against a backlash by many Poles to what they see as PiS' attacks on constitutional democracy.

The Committee for the Defense of Democracy (KOD) - a movement that has risen in the 14 months since PiS returned to power - is planning an anti-government rally to protest many of the changes that have taken place since PiS came back to power.

These include laws to curb media freedoms, impose tighter restrictions on abortion and an ongoing stalemate over the composition of the country's highest court.

The announcement coincides with the 35th anniversary of the imposition of Martial Law.

Until his death in 2014, Jaruzelski justified the imposition of Martial Law in 1981 on fears that the Soviet Union would intervene militarily in Poland if the ruling Communists did not do more to deal with the Solidarity movement that had arisen in the summer of 1980.

Most evidence suggests today that a Soviet invasion was unlikely.

PiS - whose leadership is made up of many from the underground Solidarity movement of the 1980s - has long argued that the negotiated transition away from communism in 1989 failed to punish the perpetrators of what they call 'crimes against the Polish nation.'

This includes the decision by the then defense minister, Kiszczak, in 1970 to open fire on striking dockers, killing 44 people.

Attempted prosecutions of both Jaruzelski and Kiszczak during the 1990s and 2000s ended in long and drawn-out legal stalemates and the buildup of political resentment on the right.

Jaruzelski was also a key player in the talks that ended communism peacefully in 1989, which some believe shielded many of the old guard from prosecution.

The Round Table talks of 1989 -which paved the way towards democracy - are seen on the catholic-nationalist right as a failed opportunity to purge the state of its erstwhile leaders and also lower party officials.

When last in power between 2005 and 2007, PiS sought to introduce a law that would criminalize membership of the old communist party (PZPR) before 1989. The so-called 'lustration' (cleansing) policy was largely ditched during the rule of Civil Platform (PO) - then led by Donald Tusk - between 2007 and 2015. 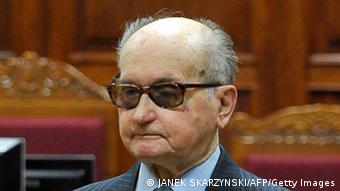 The moves against Jaruzelski and Kiszczak are largely symbolic, but PiS is also debating a new law aimed at reducing the pensions of retired secret security officials and some military leaders from the communist era.

Poland's national conservative government has removed the progressive director of its cultural institute in Berlin, according to two German newspapers. One complaint was about "too much Jewish-themed content." (06.12.2016)

Looking Back on 25 Years of Solidarity

Solidarnosc, the workers' union that played an important role in the fall of communism in Poland, was founded 25 years ago. What began as a group of dissident intellectuals became an unstoppable force for change. (26.08.2005)