New book confronts Poles with uncomfortable tales from Nazi occupation | Europe| News and current affairs from around the continent | DW | 11.03.2011

Some people in occupied Poland made a fortune from Hitler's persecution of the Jews, at least according to a new book by a Polish-American sociologist. The author's choice of topic has drawn fierce criticism. 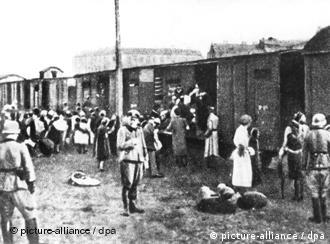 The book explores some Poles' complicity in the Holocaust

Jan Tomasz Gross' latest book, "Golden Harvest," explores the story of Polish citizens who profited from anti-Semitism during the Nazi occupation of Poland in the Second World War. Released on Thursday, this slim paperback has already caused a considerable stir in a country with a painful and proud wartime history.

"It's a tale of how some Poles behaved during the Holocaust, because they were unable to resist the temptation offered by the Nazis," Gross said. "In my opinion, many of these people were vulnerable, because of their pre-war background, which was influenced by a combination of nationalist ideology and hard-line Roman Catholicism."

Gross presents a series of examples of fortunes made by people who denounced Jews to the Nazis, and of villages whose inhabitants dug up mass graves of Holocaust victims in search of gold. One notorious example of this, according to the author, was near the death camp at Treblinka, northeast of Warsaw, where hundreds of thousands of Jews from the Polish capital were executed.

Gross, a Jewish sociologist whose family left Poland for the United States during the wave of anti-Semitic hysteria whipped up by the Communists in 1968, has published several books offering a critical analysis of his former home.

People in Poland, one of the countries worst ravaged by Hitler's war machine, tend to consider themselves victims of fascism who overwhelmingly came to the assistance of Jews.

A number of Polish historians say they have found inaccuracies in the book, while the conservative Catholic media have accused Gross of publishing a blatant lie. 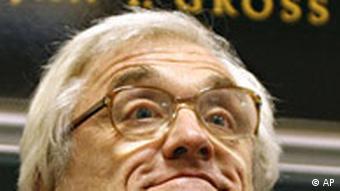 "It's the worst anti-Polish drivel written since the times of Stalinism," right-wing historian Jerzy Nowak said. "The book does not contain a single good word about the heroic efforts of Poles to save Jews during the war. Instead, Poles are branded as murderers of Jews."

Nowak said the Catholic Church in Poland comes under particular criticism from Gross, and he accused the author of displaying "hatred" towards the country's most widespread faith in most of his works.

Gross, however, argues that he is not accusing the whole country of complicity in the atrocities committed by the Nazi war machine. Instead, the intention was to augment the understanding of what went on in parts of occupied Poland.

"I reckon it will be useful to present-day Poles if they find out more about the motives that guided those who committed some reprehensible acts during the war," he said. "It's always important to reassess historical narratives."

The former Israeli ambassador to Poland, Sevah Weiss, believes that Gross' work is often misconstrued among Polish readers, some of whom may not fully understand the reasons why his family fled the country.

"He and his father didn't leave Poland because they wanted to. They were kicked out," Weiss said. "What I think needs to be done is to examine the methodology used by Gross and ultimately, to ask whether he's telling the truth. I think he is." 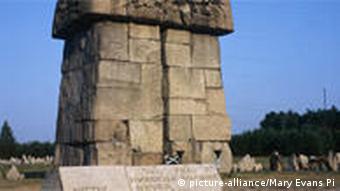 In an earlier book, the sociologist focused on the death camp at Treblinka

Weiss argues that Gross is not trying to smear an entire country or to detract from the undeniable wartime heroism exhibited by millions of Poles, but rather to show how some people "on the margins of society took advantage of the situation" during the Nazi occupation, a period of "chaos and the general collapse of all values" in Polish history.

Gross himself believes that the new book - to be released in English in October - should cause less of a stir than his former works. He argues that the growing body of work on the subject means he is no longer a lone voice, and that the Polish readers have become "much more receptive" to the type of subject-matter he discusses.

In 2001, Gross released a hugely controversial book on the 1941 massacre of around 1,600 Polish Jews in the village of Jedwabne; he was the first to depict Poles - not the Nazi occupiers - as the prime perpetrators. A subsequent Polish investigation into the affair largely supported Gross' conclusions, although it put the death toll at just 340.

Some 2.5 million Jews lived in Poland before World War II. The country was considered one of the least anti-Semitic in Europe and was a center of Jewish culture, but the communities in the country were largely wiped out during the Holocaust.

The author believes that although his book is bound to draw harsh criticism, Poland is ready to soberly assess all aspects of arguably the most difficult period in its history.

"I think enough time has elapsed. These are events that occurred 70 years ago, how long can one wait? The public is ready."

John Demjanjuk, accused of helping to murder 27,900 Jews as a Nazi death camp guard, has said he will go on a hunger strike if the Munich court trying him does not admit evidence he says will clear his name. (22.02.2011)

Hungarian prosecutors have charged wartime paramilitary officer Sandor Kepiro with involvement in murdering up to 1,200 Serbian civilians. Hungary has been criticized for proceeding too slowly with the prosecution. (15.02.2011)

Poland is marking the 70th anniversary of the outbreak of World War II. Speaking at the event, Chancellor Angela Merkel said Germany's invasion of Poland in 1939 opened the "most tragic chapter" in European history. (01.09.2009)