On the night of April 30 to May 1, witches and devils overtake the Harz region. This is one of many traditional celebrations to mark the beginning of the month of May. 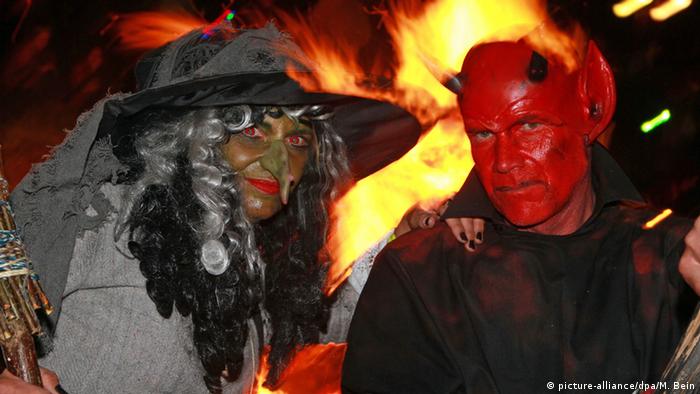 People dressed as devils and witches travel from all over Germany to the Harz region to celebrate Walpurgis Night. The most important celebration takes place on a mountain plateau in Thale called Hexentanzplatz (literally: "Witches' Dance Floor"). At midnight, the festivities centered around the medieval market in Thale will feature a devil's show, followed by fireworks, as well as comedy and music performances.

According to the tourism office for Saxony-Anhalt, there are around 20 celebrations marking the eve of May Day in the region. Thousands of visitors are expected in Thale alone, where the biggest of all the events is held, and tens of thousands should take part in the festivities in the entire Harz region. In the towns of Goslar and Wernigerode and on the Brocken, the highest peak in the Harz mountain range, witches and devils will rule for one night.

The festivities are based on ancient folklore according to which witches were believed to fly on their brooms to the Brocken mountain on the eve of May Day. Together with devils, they would celebrate the arrival of spring there.

It is called Walpurgis Night because it is the eve of the feast day of Saint Walpurga, an 8th-century abbess in Germany.