While most of the films shown at Cologne's Visions of Iran film festival were created by filmmakers born after the Islamic Revolution, it also features the final work of Iran's late cinematic master, Abbas Kiarostami.

Even though the country has been largely cut off from the western world since the 1979 Islamic Revolution, a growing number of people are interested in Iran's history, culture, cuisine — and film.

The country's rich cinema tradition, which dates back to the beginning of the 20th century, continues to build on its strong reputation, with Iranian directors repeatedly winning major prizes in international film festivals —  Jafar Panahi's "Taxi," for instance, won the Golden Bear in Berlin in 2015.

The Visions of Iran film festival held in Cologne has been showcasing the country's best cinema since 2013. 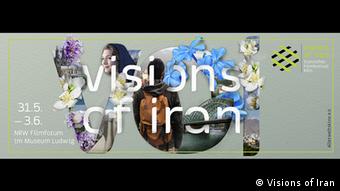 The focus of Visions of Iran this year is documentary film.

"Iranian documentaries are particularly strong when they work directly with the protagonists," said Farzanefar, who strongly values young talent and aims to address a wide variety of topics with his program.

"What is the social reality of Iran today? What are its contradictions? Which aspects of it are entertaining?" are some of the questions the films on show will answer, Farzanefar said. Panel discussions and film Q&As will also allow festival-goers to more deeply explore these questions about Iran.

An old master — and a tragic anniversary

In addition to the Karestan series that focuses on different entrepreneurs who aim to improve social and environmental conditions in Iran, the festival will also screen 24 Frames, the last film by master director Abbas Kiarostami's before his death in 2016 that bridges his cinematic and photographic work.

This year's festival also commemorates a tragic chapter of the Iran-Iraq war, with two films and a documentary portraying the Iraqi poison gas attack on the Kurdish city of Halabja that killed 2,000 people in 1988.

The most successful Iranian woman photographer and filmmaker of her generation is back with a film about a legendary female Arab singer. Before the movie's summer release, Neshat dwells on her rootless artistic life. (05.04.2018)

Highlights of the Visions of Iran film festival, 2018

The Visions of Iran film festival features contemporary Iranian documentaries that will give European audiences a unique birds-eye view into the often perilous life and times of the Persian Gulf country. (31.05.2018)