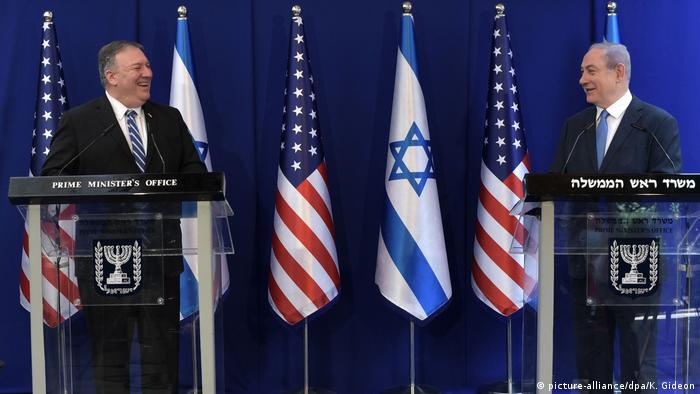 Israel's unity government agreed between Netanyahu's conservative Likud party and Gantz's Blue and White Alliance is due to be sworn in on Thursday evening.

Also present at talks with Pompeo was former Israeli army chief Gabi Ashkenazi who, according to Gantz's bloc, is set to be become foreign minister.

Pompeo, according to Reuters, urged Israeli leaders to consider "all the factors" involved in a proposed de facto annexation of the Israeli-occupied West Bank so that it squared with Washington's plan drafted by Trump's son-in-law Jared Kushner.

Jerusalem would become Israel's "undivided" capital while Palestinians would get economic aid.

Palestinians have long rejected Trump's plan and Jordan's Foreign Minister Ayman Safadi on Wednesday said annexation of much of the West Bank, Jewish settlements included, and the north of the Dead Sea "would be a disastrous step."

Israel has controlled the West Bank since seizing it in the Six-Day War of 1967. Currently, there are 3 million Palestinians and 400 Israelis in the territory.

Veteran Palestinian negotiator Saeb Erekat said Pompeo's team had not sought contact during his visit and said the Trump administration was making an attempt at "burying the rights of the Palestinian people."

Last month, the Arab League said a US-endorsed Israeli annexation of West Bank swathes would constitute a "new war crime" against the Palestinians.

Annexation, backed by Israeli hardliners and due to start July 1, would enable Trump to shore up his pro-Israeli base in the United States, especially among evangelical Christian voters, ahead of November's US presidential election.

Presumptive US Democratic nominee, Joe Biden, has said he opposes annexation. Daniel Shapiro, an ambassador to Israel during Barack Obama's presidency said the "Trump administration very much wants this annexation to happen."

The European Union reiterated its commitment to a "negotiated and viable two-state solution."

The United Nations has also said it remains committed to a two-state solution based on the borders in place before the 1967 war, when Israel also seized the Gaza Strip.

Pompeo's trip coincided with an upsurge of regional violence.

In Hebron, in the southern West Bank, on Wednesday Israeli troops shot dead a 15-year-old Palestinian, a day after a Palestinian stone-thrower killed an Israeli soldier near Jenin. Four others were wounded Wednesday by live fire.

EU foreign policy chief Josep Borrell aimed to ease tension between the US and Iran and discuss a plan for peace in the Middle East while in Washington. He called the EU-US transatlantic bond vital for global stability. (07.02.2020)