Vietnamese businessman kidnapped in Berlin gets life in prison in Hanoi

Tinh Xuan Thanh was among 20 former oil executives on trial for corruption in the southeast Asian country. The German government had accused Vietnam of kidnapping Thanh in 2017 while he was walking in a Berlin park. 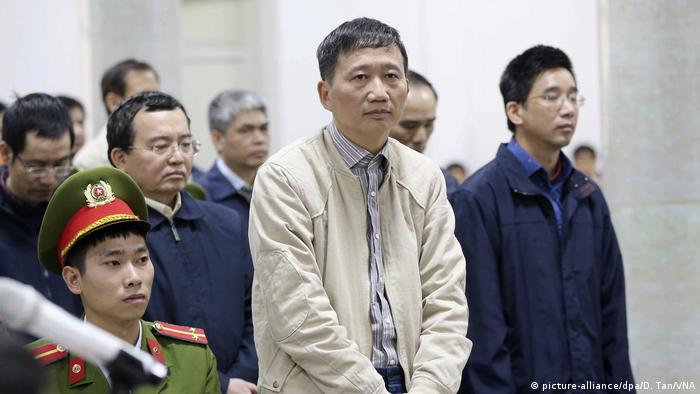 A court in Vietnam on Monday sentenced a former oil executive allegedly kidnapped by Vietnamese agents in Berlin to life in prison for embezzlement and economic mismanagement.

Trinh Xuan Thanh (pictured) had faced a possible death penalty sentence. The 52-year-old was among 22 executives linked to state-owned PetroVietnam on trial as part of a vigorous anti-corruption crackdown.

The court also sentenced Dinh La Thang, a former member of the country's Communist politburo, to 13 years in prison.

Germany accuses Vietnam of kidnapping Thanh in a Berlin park in July and forcibly returning him to Vietnam to face trial. Hanoi denies the accusations.

Thanh had been accused of embezzlement and mismanaging funds as the former chairman of PetroVietnam Construction Joint Stock Corporation (PVC), a PetroVietnam subsidiary.

He fled Vietnam to evade the charges in 2016 and was seeking political asylum in Germany shortly before the alleged kidnapping. 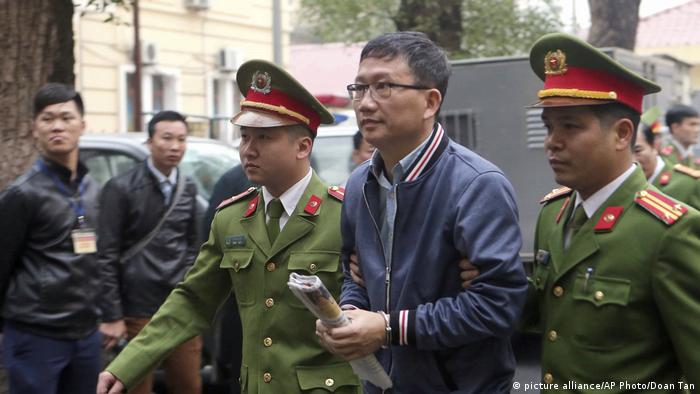 Trinh Xuan Thanh being led into court by Vietnamese police

Thanh will return to court on Wednesday to face a separate set of embezzlement charges. Those charges purport Thanh bagged $620,000 (€510,000) in state funds and carry the death penalty.

The Vietnamese government has cracked down on corruption at PetroVietnam and the national banking sector since the election of Nguyen Phu Trong as Communist Party leader in 2016.

The Vietnamese suspect is accused of taking part in the high-profile abduction of fugitive oil executive Trinh Xuan Thanh in Berlin. The alleged spy was detained in Prague earlier this year and is now in German custody.

Media reports indicate the Taliban have taken over the presidential palace in Kabul and claimed victory, hours after President Ashraf Ghani fled the country. Evacuations from the capital are ongoing. DW has the latest.