Protesters have marched through Vietnam's capital to mark the 28th anniversary of a bloody battle with China in the South China Sea. Rival claims to the disputed waters are a source of tension between the neighbors. 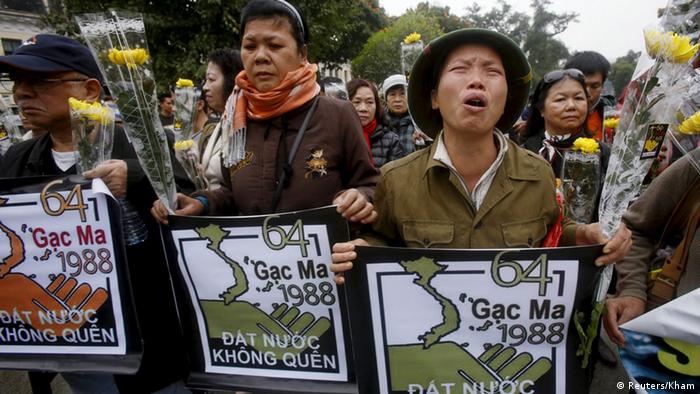 About 150 people gathered in central Hanoi on Monday to remember the 64 Vietnamese soldiers killed in the 1988 skirmishes with the Chinese navy.

The demonstrators lit incense and laid wreathes, before marching around the landmark Hoan Kiem Lake chanting "down with Communist China's aggression."

The protest was small, but significant given that Vietnamese authorities usually break up any unauthorized demonstrations. Anti-China sentiment is strong among the Vietnamese population, and Beijing's increasingly assertive actions in the South China Sea in recent years have sparked public anger and protests.

The 1988 battle with the Chinese took place at Johnson South Reef in the Spratly Islands. There are varying accounts of the confrontation, and it is a sensitive issue for the Vietnamese government, which doesn't officially commemorate the incident.

"I think the government should organize official ceremonies to remember those soldiers who were killed defending Truong Sa and Hoang Sa islands," said 84-year-old retired civil servant Le Mai Dau, one of the participants in Monday's march. Truong Sa and Hoang Sa are Vietnamese terms for the Spratly and Paracel islands.

China is Vietnam's largest trading partner, and the communist parties that lead both countries have historically been close. But the two neighbors are also locked in long-standing territorial disputes over parts of the South China Sea.

Both countries claim the Spratly and Paracel islands, and there are also competing claims from others in the region, including the Philippines, Malaysia and Brunei. Beijing has ramped up activity in the area by reclaiming the land around the Johnson South Reef and building artificial islands, including airstrips with the potential to host military jets. Vietnam's foreign minister last month accused China of taking steps that threaten peace and "accelerate militarization."

Vietnam has lodged a protest against China's apparent deployment of a surface-to-air missile system in the South China Sea. But Vietnam isn't the only country that is worried Beijing is stoking tensions in the region. (19.02.2016)