Beijing has rejected accusations that a flight test it conducted in a contested part of the South China Sea was illegal. Vietnam alleged China's landing of a plane on a Beijing-built airstrip violated its sovereignty. 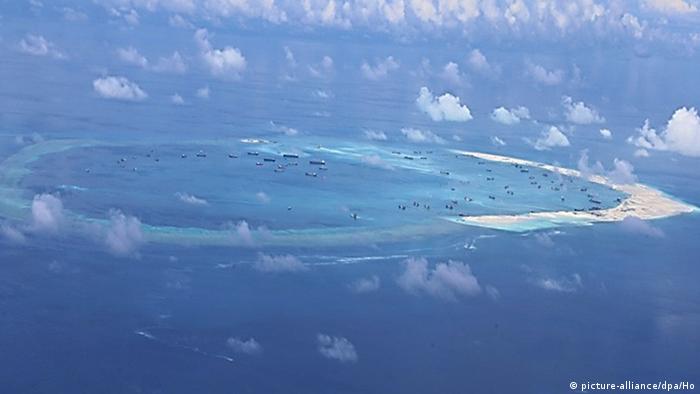 China in turn, rebutted Vietnam's protest by saying that the test flight was conducted to find out if the new airfield met the standards for civil aviation.

"Relevant activity falls completely within China's sovereignty," Chinese foreign ministry spokeswoman Hua Chunying said in a statement. "The Chinese side will not accept unfounded accusations from the Vietnamese side," she added.

Washington expressed concerns at the latest developments saying that China's flight had aggravated tensions. There was "a pressing need for claimants to publicly commit to a reciprocal halt to further land reclamation construction of new facilities and militarization of disputed features," the US State Department's Pooja Jhunjhunwala said in a statement.

A mayor in the Spratly islands on DW's WorldLink

"We encourage all claimants to actively reduce tensions by refraining from unilateral actions that undermine regional stability, and taking steps to create space for meaningful solutions to emerge," she added.

Vietnam has an airstrip in the Spratly islands, which it uses for slow-moving cargo and surveillance flights. In recent times, Beijing has been increasingly concentrating on the South China Sea which houses an archipelago rich in natural resources and is a key shipping route. It has also begun piling sand on coral reefs and constructing airfields, radar installations and docking facilities on them.

Countries bordering the South China Sea, including Vietnam and the Philippines, and the United States have repeatedly registered their protests at Beijing's actions but China has denied it has any hostile intentions in implementing the project.