Hanoi has sentenced the pro-democracy activist to prison followed by house arrest. The 69-year-old is the latest in a slew of journalists to be jailed for disseminating "anti-state propaganda." 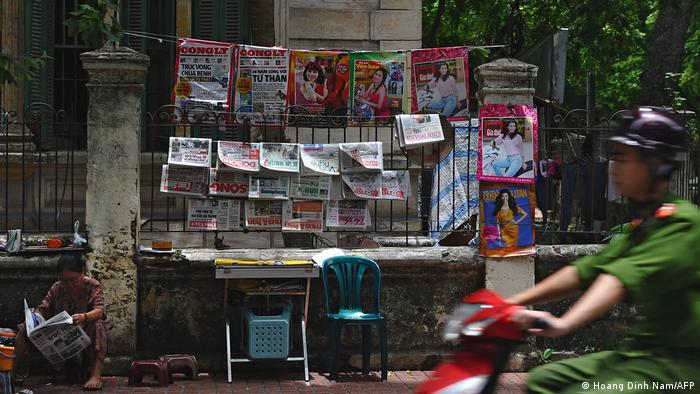 All independent media is banned in Vietnam

A court in Vietnam jailed former radio journalist turned pro-democracy activist for five and a half years in a closed-door trial Friday. The prison term is to be followed by five years of house arrest.

Pham Chi Thanh was found guilty of "making, storing, disseminating and propagandizing information, materials and products that aim to oppose the state of the Socialist Republic of Vietnam," his lawyer Ha Huy Son said.

Who is Pham Chi Thanh?

He became disillusioned with the ruling Communist Party of Vietnam (CPV), saying it served to maintain dictatorship. The 69-year-old left the party after 41 years of membership and began voicing pro-democracy sentiments.

The state-run Vietnam News Agency (VNA) quoted the court's claim that Thanh had "distorted information that caused social concern" on his Facebook page as well as given interviews to foreign media outlets.

His lawyer said Thanh "rejected the indictment, saying [in court] he did not break the law."

What rights groups say about the sentencing

Not only did Thanh voice his opinions online — in 2019 he also published a book critical of CPV leader Nguyen Phu Trong, saying, among other things, that the politician was too cozy with China.

"Pham Chi Thanh is among a long list of Vietnamese dissidents prosecuted for nothing more than their written words," said John Sifton, Asia director of the NGO Human Rights Watch.

Last month Vietnamese police also arrested 51-year-old Le Van Dung on the same charges as Thanh. A freelancer, Dung posted live Facebook and Youtube reports in which he discussed the state of Vietnam's socio-economic and political situation — including relations with China.

The absence of independent media in Vietnam

State media outlets have reported on the recent arrests of at least four freelance journalists for "abusing democratic freedoms to infringe upon the interests of the state."

In the 2020 edition of RSF's annual World Press Freedom Index, Vietnam, which has banned all independent media outlets, ranked 175th out of 180 countries.