European investors are likely to look beyond China following the suspension of an investment agreement. Strong diplomatic relations and trade ties with Vietnam mean that the Southeast Asian country is tipped to profit. 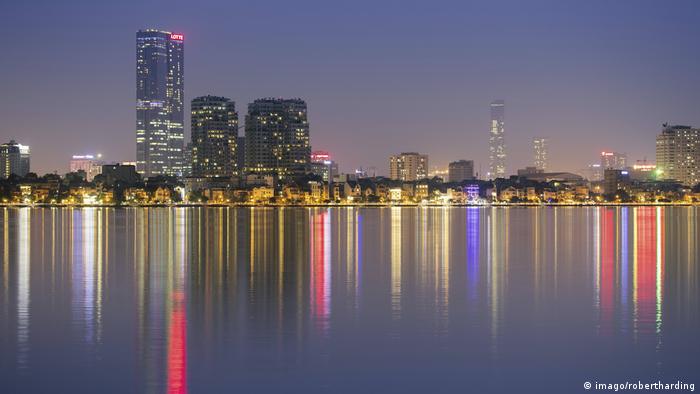 Vietnam saw economic growth in 2020 despite the coronavirus pandemic

In geopolitics as in business, one person's loss is another's gain. As such, Vietnam could be set to benefit from an increase of investment from EU states after European leaders intimated in early June that their investment pact with China is now off the table.

Recent data suggest that this remains more of an aspiration than reality right now, with investment from EU states only marginally increasing from 2020 to 2021.

Controversially agreed upon by the European Commission last December, the EU-China Comprehensive Agreement on Investment (CAI) was uncertain to pass the European Parliament before a major deterioration of relations, especially after Beijing slapped sanctions on several EU politicians and think tanks in May in retaliation for EU sanctions on Chinese officials.

Vietnam has had one of Asia's fastest growing economies over the past decade and even saw economic growth in 2020 despite the coronavirus pandemic. It was also a chief beneficiary after the US-China trade war began in 2018, with mainly American and Japanese firms moving their manufacturing operations to Vietnam and away from China.

"Along the lines of trade war risk, the suspension of the CAI is likely to accelerate the foreign investors in China, particularly EU investors, to look for an alternative investment destination and Vietnam is one of the top investment destinations," said Tuan Le Anh, deputy CIO and head of research at Dragon Capital, an analytics firm.

In terms of trade, Vietnam's relations with the EU have improved considerably in recent years. In 2020, Vietnam became the EU's 15th largest partner in the trade in goods, with bilateral trade worth €43.2 billion ($51.2 billion), according to European Commission data. The majority of that trade includes Vietnamese exports into EU markets.

That makes the EU Vietnam's second largest export market, after the United States. Vietnamese exports to the EU were worth around $10 billion in the first quarter of 2021, up 18% year-on-year.

EU trails behind others in Vietnamese investment

The EU currently trails behind other major economies in investment in Vietnam. As of 2019, EU investment stock in Vietnam was valued at €6.1 billion, according to EU data. That compares to more than $60 billion cumulatively invested by South Korea and Japan.

Anh, of Dragon Capital, noted that Vietnam received $15.3 billion in foreign direct investments in the first six months of 2021. Of that amount, $5.64 billion came from Singapore, followed by Japan ($2.44 billion) and South Korea ($2.05 billion). These are the three largest cumulative investors in Vietnam.

Considerable investment over the past decade by South Korean giant Samsung has made its subsidiary the most profitable firm in Vietnam and has turned the country into the second-largest exporter of smartphones, after the United States. In recent years, Silicon Valley-based Apple and the Taiwanese tech giant Foxconn have also invested heavily in Vietnam, including an additional $700 million pledged this year.

Data from the Planning and Investment Ministry indicate that, as of May, cumulative foreign direct investment (FDI) from the Netherlands ($10.3 billion) was larger than that of the United States ($9.6 billion). But France, Germany and Luxembourg are currently ranked as only the 16th, 17th and 18th largest investors in Vietnam, respectively. Switzerland and Belgium come in 20th and 22nd.

Analysis by DW reveals that increased EU investment in Vietnam remains uneven. German FDI stock in Vietnam increased by 7.6% between the first half of 2020 and the first half of 2021, from $2.08 billion to $2.24 billion. Belgium's FDI stock rose by 6.4% over the same period. However, the increase was more paltry for other EU states: The Netherlands rose by 1%, France by 1.2% and Luxembourg by just 0.6%

By comparison, South Korea and Japan, which already had considerably higher FDI stock in Vietnam, increased their investments by 5.5% and 4.9%, respectively, over the same period.

Nonetheless, all indications are that Vietnam is ripe for increased European investment.

A report published in February by the European Chamber of Commerce in Vietnam found that European businesses had high levels of confidence in the market, with 48% describing their business activities as "excellent" or "good," marking a considerable increase from scores in 2020.

Indeed, Vietnam saw GDP growth of 6.61% on the year in the second quarter of 2021, an indication that growth rates could return to pre-pandemic levels this year despite several coronavirus waves experienced in 2021.

Not only did a free trade pact between the EU and Vietnam enter into force last year, but Hanoi has also been busy agreeing on a slew of trade deals, from its participation in the Pacific-rim Comprehensive and Progressive Agreement for Trans-Pacific Partnership to the Asia-wide Regional Comprehensive Economic Partnership.

However, sources reckon that both sides need to do more to boost investment.

Can Vietnam establish an edge?

"Whether Vietnam can benefit from this will depend on how Vietnam can make itself more attractive to European investors. Vietnam is trying its best to do so but there are still challenges," said Le Hong Hiep, a senior fellow at the Vietnam Studies Program at the ISEAS–Yusof Ishak institute.

For the Europeans, that means ratifying the EU-Vietnam Investment Protection Agreement (EVIPA), which was agreed at the same time as the EU-Vietnam free trade pact. However, European law means that each member state must ratify the deal before it comes into force.

According to Hiep, more important is how the new government under Prime Minister Pham Minh Chinh, who was elected by the ruling Vietnamese Communist Party delegates in March, undertakes pro-business reforms.