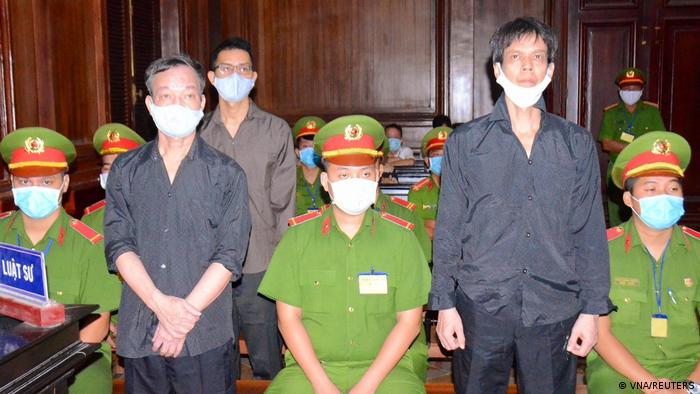 Independent journalists Pham Chi Dung (R), Le Huu Minh Tuan (C) and Nguyen Tuong Thuy (L) have all been sentenced to more than a decade behind bars for criticizing the government

The verdict comes just weeks before a leadership transition is set to take place behind closed doors at the Communist Party of Vietnam (CPV) 13th national congress in the capital, Hanoi. Whoever takes the reigns will decide the one-party state's key policies for the next five years.

The Ministry of Public Security said the journalist trio were "making, storing, spreading information, materials, items for the purpose of opposing the state" at the one-day trial.

According to the court's verdict cited by state-run media, the three "had regularly been in contact with regime opponents."

One of the men, high-profile writer Pham Chi Dung, 54, previously worked for the Vietnamese Department of Internal Affairs and Security.

After 20 years, Dung quit the role in December 2013, saying the "Communist Party no longer serves and represents the interests of the majority of the people."

In 2014, he founded the Independent Journalists Association of Vietnam (IJAVN) to advocate for press freedom but the state has since declared it a criminal organization. Dung received a 15-year jail sentence.

All three will serve an additional three years under house arrest following their release from jail.

Lawyer Dang Dinh Manh, who defended Dung and Tuan, told Germany's dpa news agency that the court did not accept any of the legal arguments he presented. He described the sentences as "too harsh."

Crackdown ahead of CPV Congress

Under the leadership of 76-year-old Nguyen Phu Trong, the CPV has intensified a crackdown on dissent ahead of its five-yearly congress due to be held later this month.

Government officials said the journalists worked with the intent to "distort and defame the people's administration, infringe the interests of the Communist Party of Vietnam and state," adding that their stories were "especially dangerous activities that if not stopped could hurt national security."

In 2020, Vietnam imprisoned 28 journalists, making it the fourth worst country for journalist freedom behind China, Saudi Arabia and Eqypt respectively.

Ahead of the trial, Phil Robertson, deputy Asia director at Human Rights Watch, described the charges against the journalists as "bogus."

He challenged the CPV to "demonstrate its confidence by respecting civil and political rights, ending its tight control of the press, and allowing independent journalists to freely voice their opinions instead of silencing them with arrest and long prison sentences."

Vu Quoc Ngu, director of the Defend the Defenders human rights group, told dpa that the three journalists had been kept incommunicado for months and denied access to legal counsel until just before the trial.

Amnesty International said that there are more than 170 prisoners of conscience currently imprisoned in Vietnam.

Emerlynne Gil, the group's deputy regional director, told dpa the "verdict underscores the Vietnamese authorities' utter contempt for free media," adding that it was another blow to the Vietnamese people's "right to access independent information."

In 2017, Vietnamese businessman Trinh Xuan Thanh was allegedly abducted in Berlin. Now on trial in Hanoi, his kidnapping has unsettled bloggers and journalists who fled Vietnam for Berlin.

Wa Lone and Kyaw Soe Oo, who had been investigating the massacre of Rohingya in Rakhine state, were convicted last week of collecting state secrets by a court in Yangon. Suu Kyi's response to the crisis has been slammed.