Lawmakers in Vietnam have voted in senior Politburo member Nguyen Thi Kim Ngan as the first chairwoman in the history of the National Assembly. The country is replacing key officials after clashes in the Communist Party. 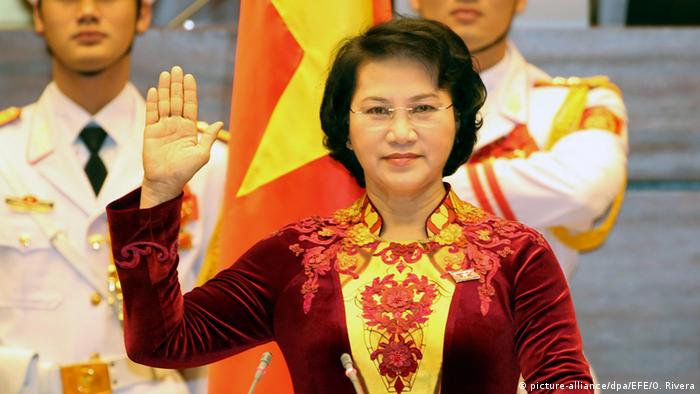 The 61-year-old Ngan won the fourth highest office in Vietnam, becoming the first woman ever to preside over the 500-seat legislature, the nation's media reported on Thursday.

Ngan was the only candidate on the ballot and garnered 95.5 percent of the lawmaker vote in the Southeast Asian country, where women hold about a quarter of parliamentary seats.

The official thanked the National Assembly and vowed "resolute loyalty to the nation, the people, and the constitution" in a televised speech.

The National Assembly officially serves as Vietnam's chief legislative body. However, most of the decisions are made inside its Communist Party, where Ngan holds a key position as a member of the powerful 19-person Politburo.

During a party congress in January, the Communist leadership picked Ngan as the future parliament chair.

The meeting, held every five years, was marked by clashes between the hardliner and reformist factions, ending in victory for the old guard and reelection of General Secretary Nguyen Phu Trong.

Reformist Prime Minister Nguyen Tan Dung lost out the internal vote and is due to step down next week.

The National Assembly is also set to vote on the new Vietnamese president on Saturday, with the party backing a police general Tran Dai Quang, the current public security minister.