Repairs made in Vienna to mutilated street photos of Holocaust survivors have been described as "touching" by artist Luigi Toscano. Vigil keepers, including Muslim and Catholic youths, even showed up with sewing kits.

German-Italian artist Luigi Toscano said Tuesday he was "especially touched" by the women who stitched back together the large photos on textile — exhibited along Vienna's Ringstrasse road, but slashed and daubed with swastikas in recent days.

Supporters on Monday said they would stage nightly vigils to protect the works until the exhibit ends next Friday.

The exhibition titled "Lest We Forget," which features 80 life-size photos, was opened in early May by Austrian President Alexander Van der Bellen.

Heading to the vigil on Monday night, Vienna's mayor, Michael Ludwig, a Social Democrat (SPÖ), said the slashing of 10 photos on Sunday and seven previous photo defacements were "cowardly" acts that not only targeted Jews but also the "core values of our society."

On Monday, sewing skills were offered by Muslim Youth Austria. The youth organization of the Catholic charity Caritas and an artists' collective said they would stand watch.

Women who came and "stitched the photos back together" had brought relief to what he previously thought had been an impossible situation, said Toscano, an artist-photographer based in Mannheim, Germany.

Toscano said he had contacted some of the survivors whose images were defaced and although shocked they had told him "now more than ever before these portraits need to be shown."

"This is right-wing radicalism," Toscano told the news agency AFP on Monday. 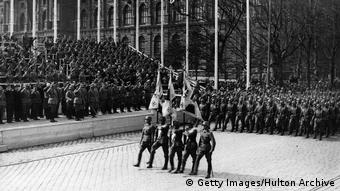 Vienna's Ringstrasse was used as a parade route by Hitler on March 15, 1938, during Nazi Germany's annexation of Austria.

Measuring 2.5 meters (8 feet) by 1.5 meters (5 feet), the all-weather portraits of Holocaust survivors interviewed and photographed by Toscano have so far been shown in 13 countries, including the United States, where, among other US cities, they were exhibited in Washington and at the UN in New York.

One recent exhibition outside San Francisco City Hall had ended without incident, Toscano said. Another, currently on show in Mainz on the banks of the river Rhine was under police guard, he added.

'Deeply worried,' 'assault on us all'

Austria's President Alexander Van der Bellen said Monday the assaults had left him "deeply worried." German Foreign Minister Heiko Maas, the project's patron, said the Vienna photo defacement amounted to an assault on Jewish life and artistic freedom — "an assault on us all."

The United Nations Human Rights Office on Tuesday condemned the attacks and expressed concern "about the rise in anti-Semitic incidents taking place in a number of European countries and the United States."

Since 2015, Toscano has photographed almost 400 Holocaust survivors all over the world. Many looked directly into the camera, some serious, some smiling. Those displayed show survivors he photographed in Germany, the United States, Ukraine, Israel and Russia.

"We have to keep alive the discussion and analysis of the Holocaust," said Toscano.

The project includes a book and documentary film.

Austria's far-right Freedom Party (FPÖ) says its ministers will step down from the Cabinet. The move came as Chancellor Kurz proposed the ouster of FPÖ member Herbert Kickl as interior minister after a video scandal. (20.05.2019)

For the 10th time in a row, the Austrian capital has taken first place in the annual ranking by consulting firm Mercer, which rates cities by quality of life worldwide. We show you how beautiful Vienna is. (13.03.2019)