Police say it's not clear how the shooter managed to get to Vienna's city center armed with an assault rifle, handgun, machete and fake explosive belt. They're also still looking into how the weapons reached Austria. 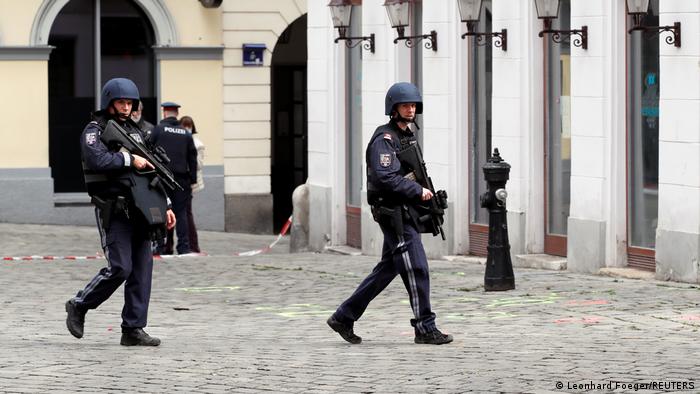 Austrian investigators have identified 21 suspected accomplices of an Islamist gunman who went on a deadly rampage in Vienna last week, officials said Friday.

On November 2, the assailant, named as dual Austrian-Macedonian national Kujtim Fejzulai, shot dead four people and injured more than 20 others in the city center before he was killed by police.

Michael Lohnegger, the police official leading the investigation, told a press conference that the 20-year-old was the sole perpetrator of the shooting spree. But he added that it was not yet possible to say "to what extent accomplices provided support before the act."

A spokeswoman for the Vienna prosecutor's office, Nina Bussek, told reporters that 21 people between the ages of 16 and 28 were under investigation, with 10 of them in custody.

"They are essentially suspected of having contributed to the crime before the terrorist attack, and of being members of a terrorist group and a criminal organization," Bussek said.

Fejzulai carried out the attack with a Serbian assault rifle, a Soviet-type handgun, a machete, as well as ammunition made in Serbia and China. But Lohnegger said police were still investigating how the weapons reached Austria, and how Fejzulai managed to travel with them into the city center on the night of the attack.

"What we can currently actually rule out here is that the perpetrator arrived at the crime scene by public transport," he said, adding that police were looking into other options, including taxis. "Whether it is also possible that he walked to the scene of the crime, I cannot say. That means I also cannot rule it out."

Austrian authorities have acknowledged there were a number of security lapses in the months before the attack. For example, they failed to properly relay information that Fejzulai had tried to buy ammunition in Slovakia in July, and that he met with known Islamists from Germany and Switzerland that same month in Vienna.

Fejzulai was sentence to jail in April 2019 for trying to join the "Islamic State" extremist group in Syria but was released on parole last December. Despite attempting to buy ammunition and holding a meeting with Islamists, he remained free on probation because the relevant information was never passed on to the justice system.