There is a four-way tie for the lead going into the final round of the US Open near Tacoma in the US state of Washington. Among them is Jason Day, who had collapsed due to vertigo on Friday. 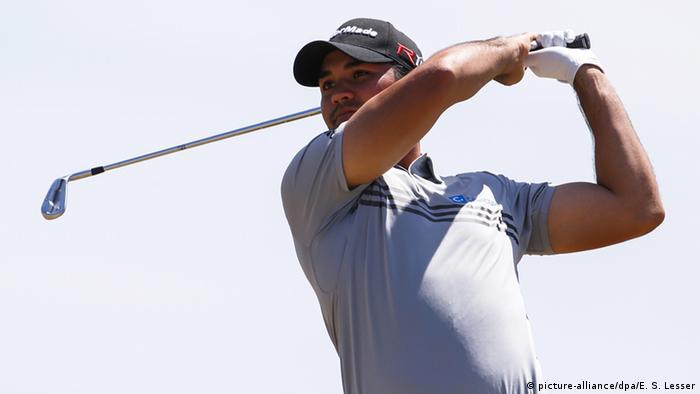 Jason Day's caddie, Colin Swatton, was full of praise for the Australian golfer, who again on Saturday endured bouts of dizziness to shoot a two-under-par 68 to give him a share of the lead going into Sunday's fourth and final round.

"I said to him 'They might make a movie about that round.' It was pretty impressive," Swatton said after he and Day had completed the third round. For his part, Day confirmed that the vertigo that had caused him to collapse during the second round, continued to be a problem.

"The vertigo came back a little bit on the 13th tee box, and then felt nauseous all day," he said. "I started shaking on 16 tee box and then just tried to get it in, really. Just wanted to get it in."

Also sharing the lead on 206 strokes for a four-under-par score over the three rounds are Masters champion Jordan Spieth, who had started the day tied at the top of the leader board with fellow Texan Patrick Reed at five under, as well as American Dustin Johnson and Branden Grace of South Africa.

Spieth (pictured above) retained his share after the third round despite shooting a one-over 71, while Johnson and Grace both shot an even 70 on the day.

Four golfers remained within striking distance at the end of the third round; Louis Oosthuizen of South Africa, Australia's Cameron Smith, Shane Lowry of Ireland and American J.B. Holmes are all three strokes back.

Six players are tied for ninth at one over through three rounds, including Reed, who stumbled to fire a six-over-par 76 on Saturday.

Last year's US Open champion, Martin Kaymer of Germany, and 14-time major champion Tiger Woods were among those who were absent from the field for the third round after having missed the cut.

Henrik Stenson of Sweden and local player Dustin Johnson share the joint lead after the first day of the US Open. Meanwhile Tiger Woods and the defending champ Martin Kaymer struggled. (19.06.2015)