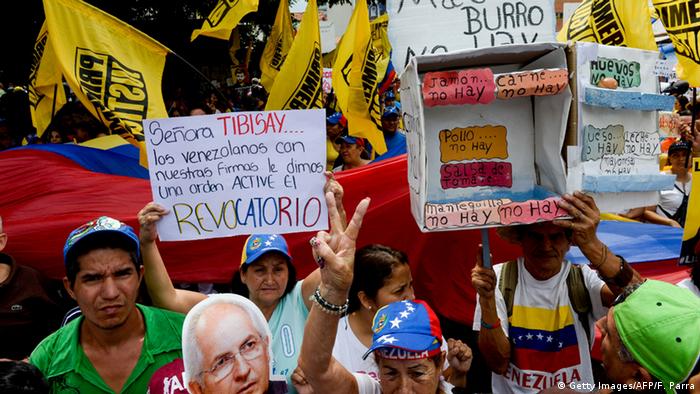 Empowered by a decree granting him extraordinary powers, embattled Venezuelan President Nicolas Maduro threatened factory owners who have shuttered their plants with imprisonment if they do not restart production.

The president ordered "all actions to recover the production apparatus, which is being paralyzed by the bourgeoisie." 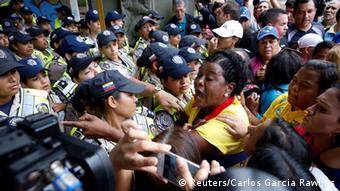 Businesspeople who "sabotage the country" by halting production at their plants risk being "put in handcuffs," Maduro warned.

Factory owners have been scaling back production, or closing outright, as the economy continues its downward spiral due, in large part, to the precipitous decline in oil prices. Although prices have recovered modestly since the start of the year, the current price, about $47 (41.50 euros) a barrel, is still less than half of what it was two years ago.

As one of the top oil producers in the world, Venezuela is heavily dependent on the price of the black gold.

In April, the country's largest food and beverage distributor, Empresas Polar, shuttered its last operating beer plant, citing an inability to buy raw materials because of a lack of hard currency.

Maduro sees it as a conspiracy and accuses manufacturers of trying to destabilize the country by exacerbating shortages of goods - everything from food to toilet paper.

Any factories who stopped working would be "occupied by the people," Maduro said in a televised speech. "We will do it. We will take over all the plants paralyzed by the bourgeoisie," he said. "Any who does not wish to work, let him leave."

Meanwhile, political tension continues to rise. The opposition claims to have collected 1.8 million signatures for a referendum to recall the president.

So far Maduro's government is blocking the initiative.

At competing demonstrations on Saturday both sides sought to rally their supporters.

Government opponents demanded that the National Electoral Council rule on the validity of the signatures collected in favor of a referendum and allow it to move forward.

"If you obstruct the democratic way, we do not know what could happen in this country," opposition leader Henrique Capriles said at one rally. "Venezuela is a bomb that could explode at any moment."

Maduro's ally, Jorge Rodriguez, told government supporters there would be no recall referendum.

"They got signatures from dead people, minors and undocumented foreigners," Rodriguez said.

The opposition insists that all of the signatures are legitimate.

Maduro tries to save daylight in Venezuela power play

It's a new time in Venezuela. On Sunday, the clocks in the South American country were brought forward to save electricity. The switch to daylight saving time could be a harbinger of political change. (01.05.2016)

Venezuelan President Nicolas Maduro and his Iranian counterpart, Ebrahim Raisi, made the announcement at a joint press conference in Tehran. The two allies have both been heavily hit by US sanctions.

In a bid to cushion the impact of the US ban on Russian oil imports, Washington is aiming to help increase production in countries like Iran, Saudi Arabia and even heavily sanctioned Venezuela.