Venezuela to knock three zeros off currency amid hyperinflation

Venezuela plans to remove three zeros off its battered currency. The largest bill in circulation, the 100,000 note, can hardly buy a cup of coffee. 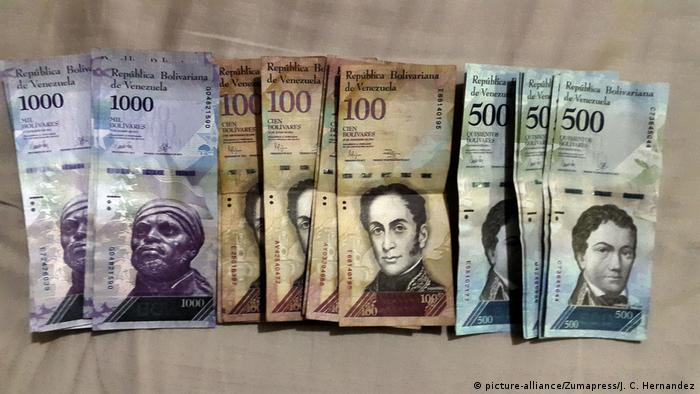 Venezuelan President Nicolas Maduro on Thursday announced he would knock three zeros off the bolivar currency amid a crippling economic crisis and hyperinflation.

"I have decided to take three zeros off the currency and remove from circulation the current banknotes and coins and put into circulation new ones from June 4," Maduro said in a televised government meeting alongside bankers.

The move does not affect the bolivar's value.

Venezuela's inflation rate was more than 6,000 percent in the 12-month period ending in February. The International Monetary Fund expects inflation to top 13,000 percent this year.

Oil-rich Venezuela's economic and political crisis has led to severe shortages of food and basic goods.

Critics say the redenomination will do nothing to improve the country's downward spiral and economic mismanagement under Maduro, who is seeking re-election in May in a vote largely boycotted by the opposition.

"Dropping three zeros from the currency without solving the problem driving hyperinflation will help nothing," tweeted Asdrubal Oliveros, a Caracas-based economist and director of the Ecoanalitica.

In 2008, the late President Hugo Chavez renamed the currency the "strong bolivar" and similarly chopped off three zeros.

Venezuela's own bitcoin-like cryptocurrency — the petro

Venezuelan President Nicolas Maduro has ordered the release of 100 million units of a new digital currency, the "petro." It will be valued at the current price of a barrel of oil, around $60. (06.01.2018)

Venezuela has begun the process of introducing a new digital currency. It's eventually meant to give the highly indebted Latin American nation greater financial leeway and reduce its dependence on capital markets. (20.02.2018)

The presidential vote had been brought forward to April 22 with two of the opposition's strongest candidates banned from taking part. The delay may give another candidate more time to get organized against Maduro. (01.03.2018)

The World Food Program director called on the US and other nations to provide financial assistance to Colombia. NGOs have tried to help Venezuelans directly, but President Maduro has repeatedly refused humanitarian aid. (13.03.2018)