Venezuelan presidential vote delayed to May after deal with some opposition parties | News | DW | 01.03.2018

The presidential vote had been brought forward to April 22 with two of the opposition's strongest candidates banned from taking part. The delay may give another candidate more time to get organized against Maduro. 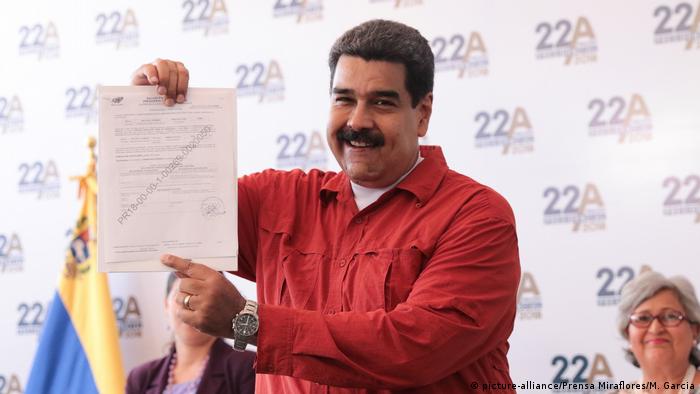 The agreement to change the date of Venezuela's presidential election was made between President Nicolas Maduro's government and representatives of a number of parties that broke away from the main opposition coalition when it decided to boycott the presidential elections.

Tibisay Lucena, chair of the National Electoral Council (CNE) said, "It is proposed that the elections for president be held simultaneously" with elections for regional legislatures.

A precise date was not given, and Lucena would only say the votes would be held "in the second half of May 2018." Thursday's date change came after an attempt to move up the regional votes to coincide with the presidential poll was quashed by the country's electoral commission.

Among those signing the agreement on Thursday was presidential candidate Henri Falcon, a 56-year-old retired military officer and former state governor. He has already launched his election campaign.

In a television interview he said: "I am a candidate of the country, I want to be the candidate of national unity and I want to be president for the salvation of Venezuela. It is not a question of bias because we are all Venezuelans."

The main opposition coalition Mesa de la Unidad Democratica (MUD) is boycotting the vote. It has criticized the CNE for its lack of independence from the government and Falcon for taking part in the election.

Falcon declared his candidacy on Tuesday ahead of Thursday's official deadline. His decision was described as "unilateral" by MUD, which said it believes conditions for the elections are unfair.

Two-time presidential candidate and leader of the Primero Justicia (PJ) opposition party, which is part of the MUD group, Henrique Capriles said: "Sadly, he [Falcon] has given into the temptation to participate and with that he is playing the game of the Maduro government, and we have to condemn him for it."

The April 22 date for Venezuela's presidential elections had been set by the government after the opposition refused to sign an agreement with the government after lengthy talks held in the Dominican Republic aimed at restoring peaceful relations between the two parties.

There has been regional pressure through the Organization of American States (OAS), which groups Latin American countries except Cuba, for Maduro to organize free and fair elections.

However, Nicaragua, Bolivia, the Dominican Republic and El Salvador rejected the OAS resolution in February that called on Venezuela to "reconsider the convening of the presidential elections" on April 22.

The United States is also considering imposing sanctions against Maduro's government due to what it called unfair conditions for the presidential vote.