Venezuela has officially declared a state of emergency, giving the government wide-ranging powers to combat its deep economic crisis. The new decree allows the Venezuelan army to distribute and sell food. 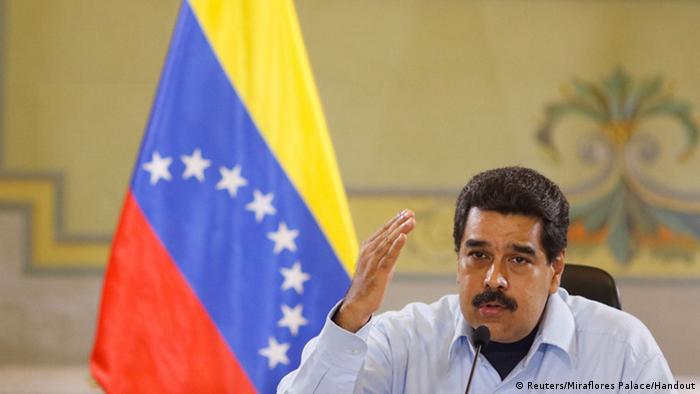 The Caracas government published the new emergency measures in its official gazette on Monday, after President Nicolas Maduro extended the earlier "economic emergency" decree on Friday.

Both emergency measures were declared over circumstances "that seriously affect" the economy and security of Venezuela, said the gazette.

Venezuela faces hyperinflation, recession and food and electricity shortages. The crumbling economy has prompted regime critics to launch a bid to oust Maduro.

However, the leftist president blames the US and other foreign countries of working against Venezuela, supported by the "bourgeoisie" and the "oligarchy" within the country. Maduro recently ordered military exercises to counter "foreign threats."

Venezuelan President Nicolas Maduro has ordered military exercises to counter what he called "foreign threats." The move comes a day after he declared a state of emergency. (15.05.2016)

State workers in Venezuela have been ordered to only work two days a week as the country struggles with an electricity crisis. Critics have said that sending employees home will only increase energy consumption. (27.04.2016)

Thousands in Venezuela are dying of totally preventable illnesses. Hospitals and pharmacies now lack a majority of medicines. The black market for medicines on social media is as tragic as it is transparent. (12.04.2016)

The emergency measures published Monday allow soldiers to distribute and sell food, as well as keep public order. The army is to be backed by organized civilian groups.

Officials have also been given control of basic goods and services, and will conduct "necessary and urgent means" to restore and maintain sources of energy.

Critics argue the move opens the way for the government to expropriate companies that fail to produce enough staple foods or to meet other government criteria.

Under the new emergency measures, the government has the authority to shorten the workweek in the private sector in a bid to conserve electricity. Public sector employees are already working two days a week.

The decree also gives the 53-year-old Maduro power to introduce new measures, as long as they do not infringe constitutional human rights.

All the new measures took effect on Monday. However, the decree still needs to be presented before the National Assembly and the Supreme Court.

The opposition-dominated parliament is more than likely to decry the notion. The Supreme Court, however, is expected to back the state of emergency, thanks to several pro-government judges at the bench.

The state of emergency is set to stay in place for at least 60 days, with the option of another two-month renewal.