State workers in Venezuela have been ordered to only work two days a week as the country struggles with an electricity crisis. Critics have said that sending employees home will only increase energy consumption. 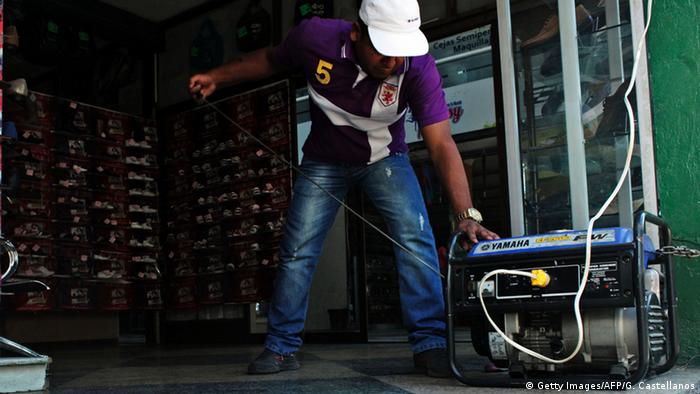 Hours for public employees in Venezuela have been slashed in an effort to conserve power, President Nicolas Maduro announced on Tuesday

"From tomorrow, for at least two weeks, we are going to have Wednesdays, Thursdays and Fridays as non-working days for the public sector," Maduro said during a television broadcast.

The country's socialist government already gave Fridays off earlier this month to around three million public workers. On Monday, the government issued mandatory four-hour blackouts in eight regions around the country.

Venezuela's vice president, Aristobulo Isturiz, added that primary and high schools will also now be closed to pupils on Fridays. However, workers at state-run hospitals and grocery stores are excluded from the work restrictions and all workers will be paid for the days they are supposed to stay home.

Venezuela's 30 million people, who are already enduring a brutal recession, have been facing shortages of basics from milk to medicines and long lines at shops.

Some of the public workers have been using their Fridays off to wait in lines for hours to buy groceries. Others have been going home to watch TV and run the air conditioning, leading critics to say the restriction is not effective at saving energy.

The government blames the power shortages on a drought caused by the El Nino weather phenomenon, and hopes that rain will replenish water levels during the work restrictions.

Reduced water levels at Venezuela's main hydraulic dam have neared critical levels. The dam provides energy for around two-thirds of the country.

"The Guri has virtually become a desert. With all these measures, we are going to save it," Maduro said, adding that the daily drop in water level had slowed to 10 centimeters from 20.

Power outages have been a chronic problem for Venezuela. Maduro's predecessor, President Hugo Chavez, promised to solve the problem in 2010, but little has improved.