Veil ban generates support and resentment among French Muslims | Europe | News and current affairs from around the continent | DW | 12.04.2011

A French law banning the full-face covering Muslim veil went into force on Monday amid some protest. In one mainly Muslim Paris suburb opinions were divided about the prohibition - and the motives behind it. 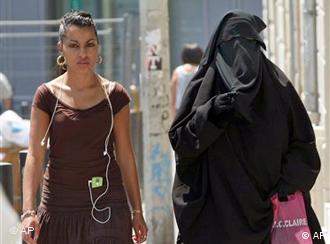 Some women say the ban infringes on their human rights

The new law, prohibiting garments such as the burqa or niqab from being worn in public, has inevitably led to differences of opinion.

French President Nicolas Sarkozy claims full face veils represent an assault on the proud French values of secularism and equality of the sexes.

Critics say the French president is trying to attract right-wing voters by focusing on Muslims. Some question whether it will even be possible to enforce the law, and street protests against the ban on Monday even led to arrests. 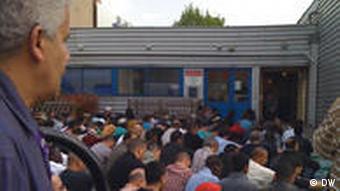 In the mainly Muslim Paris suburb of Aubervilliers, there were also strong opinions - not all of them concurring.

Outside the makeshift mosque, housed in an old office building, men knelt on carpets. Among them, Rachid Zaieri said that, for the most part, being a Muslim in France was fine. However, he said, in the last few years there had been a rise in political posturing against Islam and the burqa ban was just a part of that.

"We don't feel this law is sincere, but it doesn't mean we're in favor of the burqa," said Zaieri. "We think that the law is just an excuse to tell French people to watch out, that there is a growing Muslim population that they should be afraid of."

Inside the mosque, in the female section, every woman was wearing loose and long fitting clothing and a headscarf. Yet only a scarce few were wearing the niqab, a face-covering veil that leaves only a slit for the eyes. 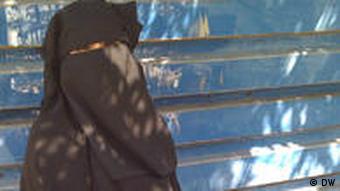 Sarah Morvan said wearing the niqab is an 'emotional experience'

Even by the French government's own estimates, fewer than 2,000 women across the country actually wear the niqab. Among the women in the mosque was 22-year-old Someya, who did not wish to give her surname.

"I feel like I'm doing something higher," said Someya. "I'm wearing it for God and for my husband, so that he'll be the only person who can see me and be able to appreciate my face."

Someya said she would take off her niqab, because she had no choice. But she said the government was infringing on her personal freedom.

Eighteen-year-old Sarah Morvan, a Muslim convert who also wears the niqab, had just pulled on her long black gloves and stepped out onto the street. Not a bit of skin was showing. Morvan refuses to remove her veil. She said the new law would only force her to stay at home more often with her three-month-old daughter, who she pushed in a stroller in the afternoon sun.

"It's a very emotional experience to wear the niqab," said Morvan. "You are sheltered from all onlookers and completely cut off from society." 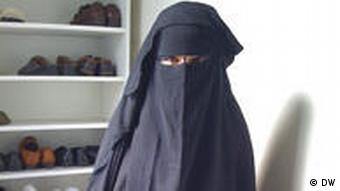 Someya said she would take off her niqab but only reluctantly

While Morvan saw the isolation from society as a positive thing, the French government has claimed it is a good reason for the ban. Sarkozy has said both the niqab and burqa take away women's humanity by cutting them off from the mainstream. Former French Immigration Minister Eric Besson called the burqa "a walking coffin."

Since Monday, police have been required to ask women to uncover their faces and show identification documents. Those who refuse can be fined 150 euros ($216) and forced to attend citizenship classes. The punishment has been made stiffer for any man caught forcing a woman to cover her face - a fine of up to 60,000 euros and possible jail time.

Some of Aubervilliers' residents said they have no problem with the law. Standing behind the bar in his café Kamel Mesbah, himself a Muslim, said the law was understandable.

"It's ridiculous," said Mesbah. "In some countries, women are fighting to uncover themselves and in a free country, like France, there are some who want to wear the burqa."

"You can't have things like men and women refusing to shake each other's hands and separate hours for boys and girls at the swimming pool," Mesbah added. "That's just not France."