The French parliament passed a law Tuesday prohibiting the wearing of a full-face veil in public. The ban is due to come into effect early 2011 if it is not overturned by senior judges. 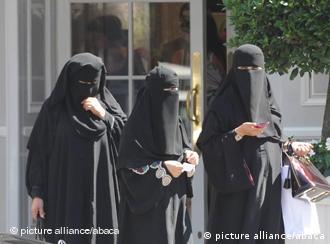 Fewer than 2,000 women wear the full-face veil in France

The French parliament has voted overwhelmingly in favor of a law banning women from wearing the Muslim full-face veil in public. The ban will come into force in six months' time if it is not overturned by constitutional judges.

French President Nicholas Sarkozy has championed the ban, which will outlaw the veils known as the niqab and the burqa from public spaces such as streets and post offices.

The text of the bill made no mention of Islam, but the Sarkozy government has argued that the law was needed to protect Muslim women from being forced to wear the full-face veil.

The law legislates a six-month "education" grace period for Muslim women to understand that they face arrest or a fine if they flout the ban. The fine could be as high as 150 euros ($195) or the individual could be made to attend so-called citizenship lessons.

"This is not about security or religion, but about respecting our republican principles," Justice Minister Michele Alliot-Marie declared before the vote.

"France, land of secularism, guarantees respect for all religions (but) hiding the face under a veil is against public social order, whether it is forced or voluntary," she said.

Opponents of the law argue that it breaches French and European human rights laws. Belgium, Spain and parts of Italy are considering similar measures but the ban is particularly sensitive in France, which is home to Europe's biggest Muslim minority.

Muslims account for some 6 percent of the total population in France, however only an estimated 1,900 women wear the full-face veil in the country.