Veh to leave Frankfurt at the end of the season | Sports| German football and major international sports news | DW | 03.03.2014

Veh to leave Frankfurt at the end of the season

Armin Veh will step down as head coach of Eintracht Frankfurt at the end of the season. The 53-year-old's final task will be to guide the club away from the relegation zone. 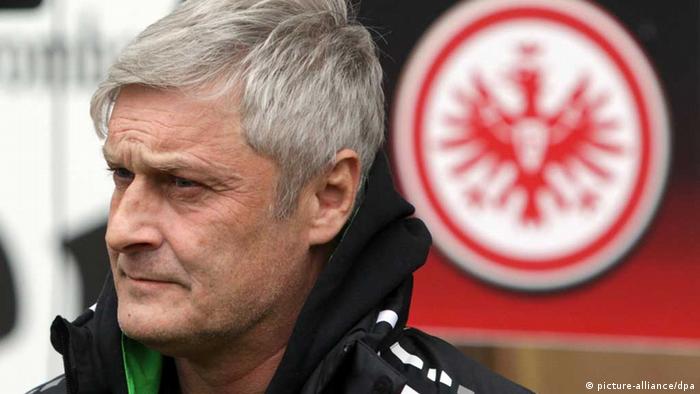 The announcement of Veh's impending departure on Monday came as somewhat of a surprise, the morning after Frankfurt had stormed to a late 2-1 win over Stuttgart. Veh's exit was confirmed by Eagles chairman Heribert Bruchhagen, meaning his time at the club will end three seasons after it began.

"They are trying everything and doing everything in order to establish Eintracht in the league," Veh said at a press conference on Monday confirming his departure. "But there are are limits, and these are not necessarily my goals.

Veh said he had not agreed a move to another club: "I still do not know what I'm doing."

He guided Frankfurt to promotion from the 2. Bundesliga in his first season in charge, before leading the Eagles to an unlikely sixth-placed finish back in the top flight in the 2012-13 campaign. Despite reported interest from Schalke, he signed a new contract at Frankfurt for the 2013-14 season.

Frankfurt have had their struggles this season, but managed to reach the Round of 32 of the Europa League. Sunday's win over Stuttgart elevated them to 12th on the Bundesliga table, and with a six-point gap from the relegation places.

A Bundesliga title winner while in charge of Stuttgart during the 2006-07 season, Veh has also had stints at the helm of Hamburg and Wolfsburg.

Many might have considered Eintracht Frankfurt’s Europa League an unwelcome distraction from Bundesliga matters. But the Eagles might not have ended their continental adventure empty handed after all. (03.03.2014)