Citing Health Ministry data, Israel has also said that the rate of COVID-19 infections dropped massively among people who received both shots of the Pfizer-BioNTech vaccine. 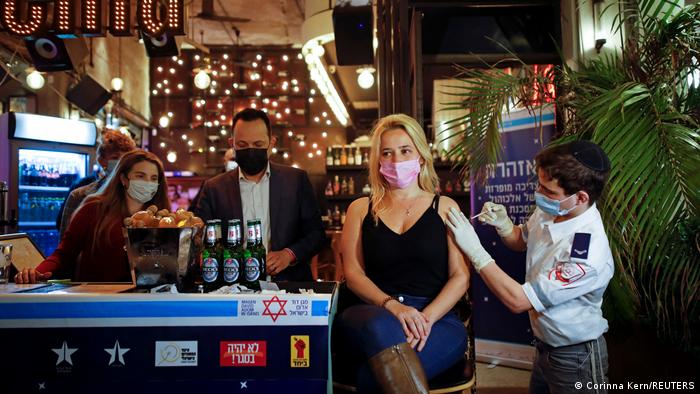 Israel's Health Ministry on Saturday said that the Pfizer-BioNTech vaccine was 98.9% effective at preventing hospitalizations and death caused by COVID-19.

The rate of COVID-19 infections also declined 95.8% among people who received both shots of the vaccine, it said, adding that the vaccine was also 98% effective in preventing infections that prompted fever or breathing problems.

"The vaccine dramatically reduces serious illness and death and you can see this influence in our morbidity statistics," the Times of Israel online newspaper quoted Health Ministry Director-General Chezy Levy as saying.

In late December, Levy had said Israel's goal is to vaccinate about 60% of the country's population by the end of the first quarter of 2021.

The findings were based on data collected nationally through February 13 from Israelis who had received their second inoculation at least two weeks previously.

Approximately 1.7 million people in the country of about nine million had received a second jab by January 30, making them eligible to be included, the ministry said on its website.

Earlier findings from individual health care providers also showed positive results, prompting the Israeli government to relax coronavirus-related restrictions, including restrictions on the economy after weeks of lockdown. Schools and many shops will be allowed to reopen from Sunday.

The Health Ministry has also launched "Green Pass" — an app tied to a person's medical history which fully vaccinated people can show to stay at hotels or attend cultural or sporting events.

"Thanks to Israel's strong health system that has allowed us to vaccinate an unprecedented wide percentage of the population, and our epidemiological tracking facilities, we are the first country in the world that can show the effect of the vaccine in the real clinical world," Levy said.

Around three million Israelis are currently not eligible to be vaccinated, including people under the age of 16 and those who have recovered from COVID-19, the Times of Israel reported.

Israel has been vaccinating largely with the Pfizer-BioNTech vaccine.