The president has acknowledged people were killed in mass protests in recent days. People in Karakalpakstan were outraged by an attempt to strip out language in the constitution guaranteeing the region's sovereignty. 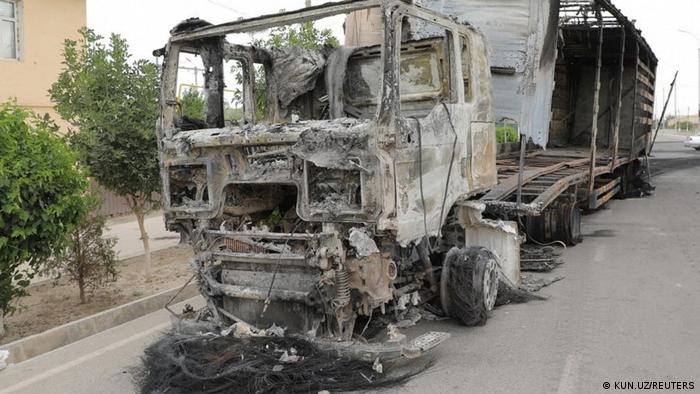 Images from Nukus, the capital of the Karakalpakstan region, showed burned-out vehicles reportedly damaged during protests

Uzbekistan's President Shavkat Mirziyoyev acknowledged on Sunday that people had been killed in largescale protests that led him to drop plans to curtail the autonomy of the country's Karakalpakstan province.

The U-turn came after rare protests and clashes with authorities in the northwestern region on Friday that saw thousands of people take to the streets in protest and some demonstrators even tried to storm local government buildings in the region's capital, Nukus.

"Unfortunately, there are fatalities among civilians and law enforcement officers," Mirziyoyev said in a speech in Karakalpakstan on Sunday. He did not specify the number of people killed.

Friday's demonstration was sparked by draft amendments to the Uzbek constitution were published, which are expected to go to referendum in the coming months.

Police said that "order had been restored" in the area taken over by the protest later on Friday.

Thousands of people were reportedly injured during the riots in Nukus.

Sultanbek Ziyayev, the head of the Ministry of Health of the Republic of Karakalpakstan, told news website Daryo.uz that hospitals in Nukus were full of patients who had been wounded when protesters clashed with security forces.

"Thousands of wounded have been hospitalized and are being treated," he said, according to the website.

An exiled opposition politician, Pulat Ahunov, told Reuters that, based on contacts with local sources and video evidence, at least five people had been killed. He said there were unconfirmed reports of dozens more dead. 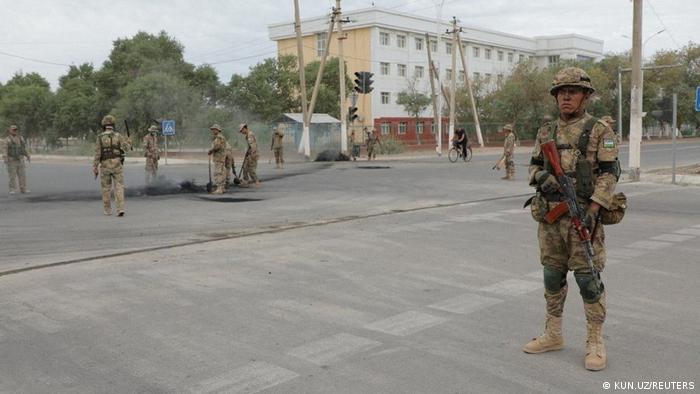 What caused the protests?

Under the current constitution, Karakalpakstan is described as a sovereign republic within Uzbekistan that has the right to secede by holding a referendum.

But the proposed new version of the constitution would have no longer mentioned the region's sovereignty or right for secession.

President Mirziyoyev's office, however, said after a hasty visit to the region on Saturday that the changes regarding its status should be dropped from the proposed reform.

Karakalpakstan takes its name from the Karakalpak people. They now constitute a minority in the region of roughly 2 million people.

Biggest challenge yet to Mirziyoyev's rule

The demonstrations presented the biggest challenge yet to Mirziyoyev's rule.

Mirziyoyev traveled to Nukus on Saturday and held talks with local lawmakers. The government announced a month-long state of emergency in the region.

The measure was being taken to "ensure the safety of citizens, protect their rights and freedoms [and] restore law and order" in the territory, the president's press secretary Sherzod Asadov wrote on Telegram.

Authorities have also restricted internet access in the territory during the last week.

What other changes are expected in the new constitution?

Uzbekistan, home to roughly 35 million people, is Central Asia's most populous country. The majority of them are Muslim.

Beyond changes to the region's status, Uzbekistan's new constitution is also expected to reintroduce seven-year terms for the presidency, up from five at the moment.

This amendment is likely to benefit Mirziyoyev, who has styled himself as a reformer who wants to reverse some of his hardline predecessor Islam Karimov's policies.

Karimov, whom Mirziyoyev served as a prime minister, died in 2016.