US women's soccer team gets partial victory on equality 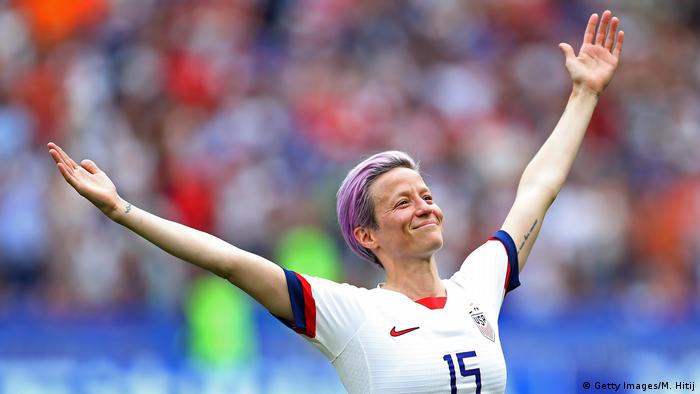 The US women's team will get equal treatment, but equal pay remains to be seen

US District Judge R. Gary Klausner on Monday approved of a partial deal between the US Women's National Soccer Team (USWNT) and the US Soccer Federation (USSF) over unequal working conditions.

Klausner approved a December settlement during the hearing. The deal calls for charter flights, hotel accommodations, venue selection and staff support for the USWNT equal to that of the US men's national soccer team (USMNT).

Going from the field to the court

The USWNT sued the USSF in March 2019, claiming that they have not been paid equally to the men's team under their current collective bargaining agreement. The women's agreement ends this December, and the men's agreement in question expired December 2018.

The women asked for more than $66 million (€55 million) in damages under the Equal Pay Act and Title VII of the Civil Rights Act of 1964.

"We are pleased that the court has approved the equal working conditions that the USWNT players have fought for many years to achieve," said players' spokeswoman Molly Levinson in a statement.

The same judge hadpreviously dismissed the $66 million claim last May. Levison said that they plan to appeal his ruling.

"We are committed as ever to our work to achieve the equal pay that we legally deserve," said Levinson.

"US Soccer is 100% committed to equal pay," said the USSF in a statement. "We have offered the USWNT the identical compensation provided to our men's players for all matches controlled by US Soccer."

FIFA awarded a total of $400 million in prize money for the participants of the 2018 Men's World Cup in Russia, including $38 million to champion France. It awarded $30 million for the 24 nations at the 2019 Women's World Cup in France, including $4 million for the USWNT after winning the tournament. FIFA President Gianni Infantino has proposed FIFA double the women's prize money for the next competition in two year's time.

The USWNT has won four FIFA World Cups, including the last two held in 2015 and 2019. The USMNT has yet to appeal in a World Cup final, and did not qualify for the previous FIFA World Cup in Russia.

The national women's soccer team in the US decided to wear practice jerseys inside-out, hiding the logo of the country’s soccer federation. Only four stars, standing for their World Cup victories, were visible.

Opinion: Led by Megan Rapinoe, this World Cup should be a seminal moment

From her comments about Donald Trump to her criticism of FIFA, Megan Rapinoe has been the voice of this Women's World Cup. Now it's time for FIFA to show it is serious about the women's game, writes Michael Da Silva.