US transfers two Syrian Guantanamo detainees to Portugal | Europe | News and current affairs from around the continent | DW | 29.08.2009

Two Syrian detainees held at the US detention center at Guantanamo Bay have been handed over to Portuguese authorities. 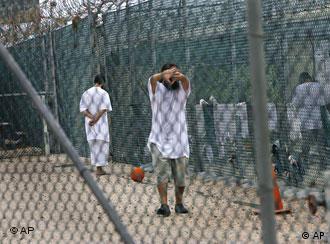 The US Department of Justice said in a statement that the transfer had been coordinated between the two governments to ensure security, and that there would be continuing communication between the two.

It was not clear whether the detainees were being transported to the Portuguese mainland.

The two Syrian detainees "are not subject to any charge, they are free people and are living in homes provided by [the] state," Portuguese officials were quoted as saying by AFP news agency.

The US has asked European countries to accommodate former inmates who cannot return to their countries of origin because of the risk of persecution.

The two men are the latest detainees to be transferred out of the prison camp on Cuba, as US President Barack Obama tries to close the controversial facility by January.

So far, a dozen suspected militants have already been been released since Obama took office seven months ago. One inmate has been sent to New York to await trial in a US court.

More than ten are waiting to be released after US federal courts ruled they were innocent of any wrongdoing. Most are waiting for third countries to take them in.

Some US lawmakers are sceptical that Obama can resolve the cases of the remaining 226 prisoners held at Guantanamo Bay by the mid-January deadline he set.

The announcement that the two Syrians would be released came days after one of the youngest detainees held at the US "war on terror" prison was returned to his native Afghanistan, and a week after the White House said a group of six detainees would be freed soon.

The Bush administration opened the prison to hold suspected Islamist militants after the Sept. 11 attacks on the United States in 2001.

Since then, more than 540 detainees have departed Guantanamo for other countries.

The United States has secured commitments from six European Union nations to take in detainees held at Guantanamo Bay, bolstering efforts to close the prison, the Washington Post reported Thursday. (20.08.2009)

Portugal will take in take two Syrians who are currently being held at the Guantanamo prison camp. Lisbon itself had originally called on EU states to help close the notorious camp last December. (08.08.2009)

The US has issued a second request to Germany to take in prisoners from Guantanamo. But the government says it needs more details before it can make a decision. (11.06.2009)

May 18, 2009: France is first EU nation to take Guantanamo inmate