US Supreme Court to hear challenge on abortion rights

The US Supreme Court will hear a case that could undermine the national legal status of abortion. Christian conservatives hope the new make-up of the court will gut previous bans on anti-abortion laws. 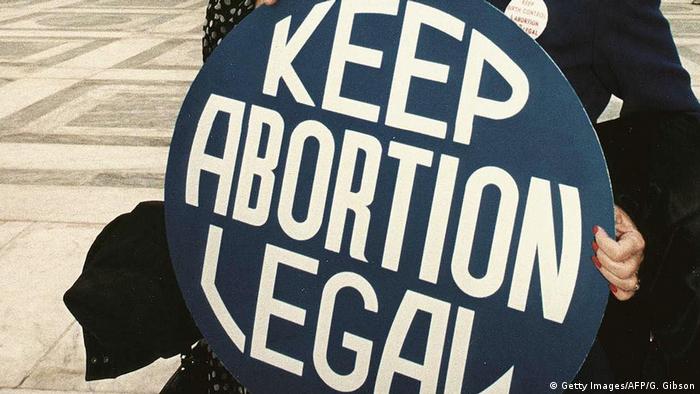 The hearing could overturn 50 years of rulings on abortion

The US Supreme Court on Monday agreed to hear a case on a second-trimester abortion ban in the state of Mississippi.

The proposed law would ban abortion after 15 weeks of pregnancy in the southern state. There would be exceptions for medical emergencies and cases of severe fetal abnormalities.

The Supreme Court will decide whether to overturn a central part of the 1973 Roe v. Wade ruling that legalized abortion across the country. That ruling forbade laws banning abortions conducted on fetuses unable to survive outside the womb — generally before between 24 and 28 weeks of pregnancy.

The ruling was confirmed in the 1992 case Planned Parenthood of Southeastern Pennsylvania v. Casey, and further prohibitions were placed on laws that place an "undue burden" on obtaining abortions.

The American Civil Liberties Union said the results of the review could be devastating.

"[The Supreme Court] review of the Miss. 15 week abortion ban is scary. If Roe is overturned/limited, it will be devastating. For decades abortion has been pushed out of reach for many, hitting the most marginalized the hardest. Abortion is still legal; we need to fight to keep it that way," ACLU lawyer Brigitte Amiri said.

NARAL Pro-Choice America said it was "a direct challenge to Roe v. Wade, opening the door for this majority-conservative, anti-choice (Supreme Court) to overthrow Roe."

The review was welcomed by US anti-abortion groups.

The heavily Christian state of Mississippi is attempting to revive the Republican-backed state law and fulfill the longtime goal of US Christian conservatives and have Roe v. Wade gutted. The 2018 law was drafted in the knowledge that it would act as a challenge to Roe v. Wade.

The state's only abortion clinic defeated the law in a federal court in 2018 and then again in an appeals court, prompting the appeal to the Supreme Court.

The court will hear the case in its next term, which runs between October 2021 and June 2022.

In 2020, it struck down a restrictive abortion law in Louisiana, but the make-up of the court now is now seen to skew conservative, following former President Donald Trump's three appointments during his tenure.

Roe v. Wade plaintiff says she was paid to turn against abortion movement

In a new documentary, the woman at the center of the court case that legalized abortion in the US has said she was paid to turn against the ruling.

The US Supreme Court said that abortion pills must be obtained in-person, even during the pandemic, lifting a suspension of the rule by a lower court. Similar rules for other drugs, including opioids, have been waived.