In a setback for the Trump administration and Republicans, the Supreme Court rejected a law that could have closed two of three abortion clinics in Louisiana. Chief Justice John Roberts cast the decisive vote. 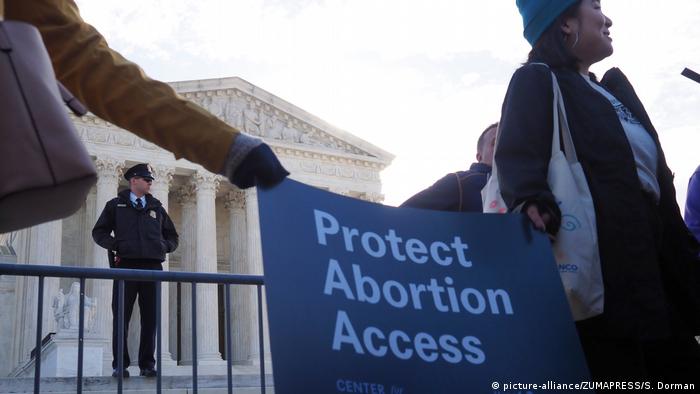 The US Supreme Court on Monday struck down a law in the state of Louisiana that placed restrictions on abortion rights.

Specifically, the bill had required doctors to have a formal affiliation called "admitting privileges" to perform abortions at a hospital within 30 miles (48 km) of the clinic. The hospital would have the right to admit or reject the privilege.

Lawyers for Hope Medical Group for Women, who brought the case before the Supreme Court, said two of Louisiana's three abortion clinics would have been forced to close if the law went into effect.

In a 5-4 ruling, conservative Chief Justice John Roberts joined the four liberal justices in the majority. ''The result in this case is controlled by our decision four years ago invalidating a nearly identical Texas law,'' Roberts wrote.

He explained that the court had settled the question of "admitting privileges" already and that there was no reason to change that consensus.

Roberts' vote came as a surprise to supporters and opponents of abortion rights, as the chief justice had voted in favor the identical Texas law.

Even though he still believes the Texas case was wrongly decided, Roberts explained his rationale for voting differently by saying "the legal doctrine of stare decisis requires us, absent special circumstances, to treat like cases alike."

A blow to conservatives

The decision was a blow to President Donald Trump's administration, which had supported the law in Louisiana. Many pro-life Republicans were hoping that with the appointment of Justice Brett Kavanaugh, the Supreme Court would tip the balance in their favor on abortion rulings.

"Today's ruling is a bitter disappointment," said anti-abortion group Susan B. Anthony List, adding that it represented "the failure of the Court to allow the American people to protect the well-being of women from the tentacles of a brutal and profit-seeking abortion industry."

Nancy Northup, president of the Center for Reproductive Rights, said they were relieved that the court blocked the Louisiana law.

"With this win, the clinics in Louisiana can stay open to serve the one million women of reproductive age in the state," she said in a statement.

"But we're concerned about tomorrow," she said. "Unfortunately, the court's ruling today will not stop those hell-bent on banning abortion."

The Louisiana law is just one of several abortion rights cases that will be appealed to the Supreme Court, which include bans on abortion once a fetal heartbeat is detected and the almost total ban passed in Alabama.

Governor Michelle Lujan Grisham has signed an executive order to establish a new abortion clinic that will help cope with increased demand for the procedure from out-of-state patients.

US president Joe Biden signed an executive order on abortion, seeking to protect women from new criminal penalties. Biden said the country could not allow an "out of control" Supreme court to limit Americans' freedoms.