The US Supreme Court has ruled restrictive laws imposed on abortion clinics in Texas violate the constitution. Pro-choice advocates hailed the ruling as the most important decision in decades. 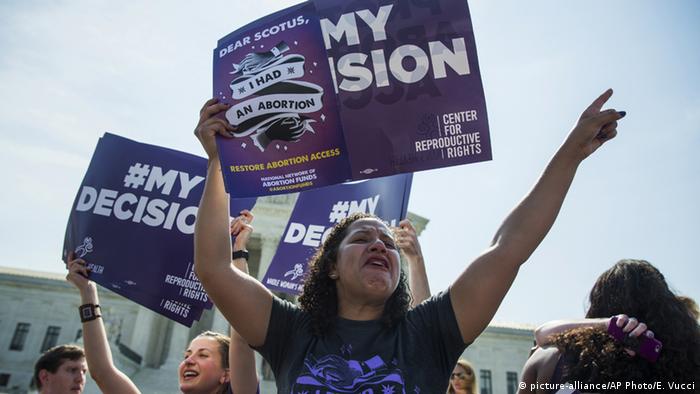 The US Supreme Court in a 5-3 ruling on Monday found a Republican-backed law on abortion doctors and facilities imposed an undue burden and violated a women's constitutional right to have an abortion.

The ruling affects millions of women across the United States as Texas' restrictive laws have been replicated in other conservative states. Abortion advocates have argued the restrictions amount to nothing more than a concerted effort to close down clinics.

Justice Stephen Breyer, writing the opinion, said courts needed to "consider the burdens a law imposes on abortion access together with the benefits that those laws confer."

The 2013 law required doctors working in abortion clinics to have "admitting privileges," a hard-to-get permission to admit patients to a nearby hospital. Another part of the law required clinics to have expensive and unnecessary equipment and facilities on par with those of outpatient surgical centers.

The required regulations ran the gambit from the width of hall corridors to electrical wiring and plumbing. As a result, the number of clinics operating in Texas had dropped from 41 to 19 since the law was passed.

The Supreme Court found the additional measures provided little or no added safety to women.

Backers of the law argued that they were necessary to protect public health.

"Now abortion clinics are free to ignore these basic safety standards and continue practicing under substandard conditions. By its ruling, the Court held that the ability of abortion clinics to remain open - even under substandard conditions -outweighs the state's ability to put women's health and safety first," said the state's Lieutenant Governor Dan Patrick, a Republican, following the ruling.

Women's rights groups hailed the court for making the most important decision for abortion rights since the landmark 1973 Roe vs. Wade, which legalized abortion across the United States.

"Every person must have the right to make their own personal decisions about abortion, and we will fight like hell to ensure they do," said Cecile Richards, the president of Planned Parenthood.

Amy Hagstrom Miller, founder and CEO of Whole Woman's Health, an abortion provider that was the plaintiff against the law, said: "Every day Whole Woman's Health treats our patients with compassion, respect and dignity - and today the Supreme Court did the same. We're thrilled that today justice was served and our clinics stay open."

Abortion remains a deeply divisive social and political issue in the United States, with polls showing little substantial change over the years. According to a 2016 Gallup poll, 47 percent of respondents identified themselves as pro-choice compared to 46 percent as pro-life.

Polish anti-abortion groups have marched in support of severe restrictions on pregnancy terminations. Supported by government and church, already deeply conservative abortion laws could become even more so. (15.05.2016)

A revised Texas abortion law being scrutinized by the US Supreme Court has exposed splits among its eight remaining judges. The case could become a key issue amid the raucous US presidential election run-up. (03.03.2016)

Webvideo: My picture of the week | Fight for self-determination