US states see small protests ahead of Joe Biden inauguration

President Trump's supporters have begun their rallies across the country but there hasn't been reports of major violence. Security has been beefed up in state capitals ahead of Joe Biden's inauguration on Wednesday.

Police and National Guard troops were deployed Sunday to fortified US government houses around the country in preparation for a potential wave of violent protests by supporters of President Donald Trump.

Federal and state law enforcement officials warned of possible fresh disturbances around state legislatures after a large pro-Trump mob stormed the US Capitol building in Washington DC on January 6.

The riot led to dozens of arrests and the second impeachment of the president.

Trump supporters believe that he won the election and that fraud was committed on a massive scale, despite strong evidence to the contrary and no evidence surfacing to prove their point of view in dozens of courts that heard cases on the matter. 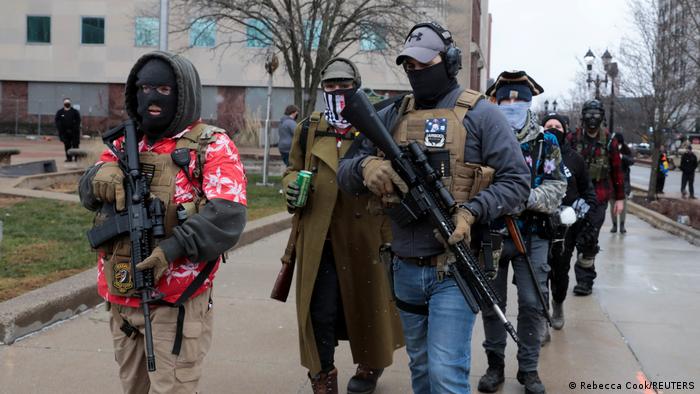 Armed members of the far-right, anti-government Boogaloo Bois outside the State Capitol in Lansing, Michigan

Sunday's protests began in a quiet and peaceful manner, including at the Ohio, South Carolina, Texas and Michigan statehouses, where some of the demonstrators were reported to be armed.

The New York Times reported that the extremist Boogaloo bois movement was present in several locations, carrying military-style rifles. It said the men were part of a group who hopes that a second civil war will lead to the overthrow of the US government.

In addition to increasing police presence, and erecting barriers to protect their legislatures, some states, including Pennsylvania, Texas and Kentucky, took the further step of closing their capitol grounds to the public.

The US Federal Bureau of Investigation (FBI) has warned that armed protesters could turn up, as right-wing extremists have been emboldened by the deadly siege in Washington.

Security officials have singled out the anti-government "boogaloo" movement in particular, as one that has made plans weeks ago to hold rallies in all 50 states.

It remained unclear whether the increased security presence could lead some protesters to stay at home.

Some right-wing militia groups have canceled a long-planned pro-gun demonstration, like that of the state of Virginia, which was planned for Monday.

They have told followers to stay home this weekend, citing the increase in security as law enforcement traps.

Security officials on Sunday arrested an elected official from New Mexico who had vowed to travel to Washington with firearms to protest President-elect Joe Biden's inauguration, according to the US Justice State Department.

Cuoy Griffin, a New Mexico county commissioner and founder of a group called "Cowboys for Trump," was among the thousands of people who stormed the Capitol Hill in an attempt to block Congress from certifying Biden's victory over Trump.

Authorities said Griffin returned to New Mexico after the riot, where he said at a January 14 meeting of the Otero County Council that he planned to go back to Washington to protest Biden's inauguration on Wednesday. 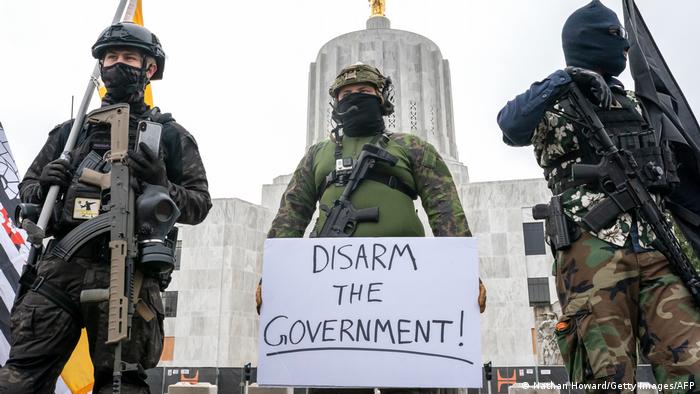 Members of The Boogaloo Bois in Salem, Oregon

Meanwhile, the District of Columbia has been ramping up security in and around the US Capitol in Washington. On Sunday, the downtown area was a virtual ghost town, except for battalions of camouflaged National Guard soldiers.

The troops began arriving in the US capital days ago, with the aim of fortifying the city against potential protests and violence during the transfer of power from Trump to President-elect Joe Biden.

Biden’s inauguration is scheduled to take place on Wednesday, January 20, in a scaled-down ceremony that will still be celebrated on the steps of the US Capitol.

Authorities were on high alert when on Saturday a man with a loaded handgun, shoddy credentials and more than 500 rounds of ammunition was arrested at a security checkpoint near the Capitol.

The man told authorities that it was "an honest mistake" and that he was a private security guard who got lost on his way to work near the Capitol.

The USA divided: America after Trump

The USA divided: America after Trump

A 2-meter-high fence lines the area around the Capitol. National Guard soldiers are patrolling the building and Capitol police roam the surrounding streets. The scene has changed dramatically since last week's riots.