US sports stars stand up for abortion rights

Megan Rapinoe, Sue Bird and Diana Taurasi are among more than 500 US female athletes who have petitioned the Supreme Court. The state of Mississippi wants to ban the right to abortion in the US. 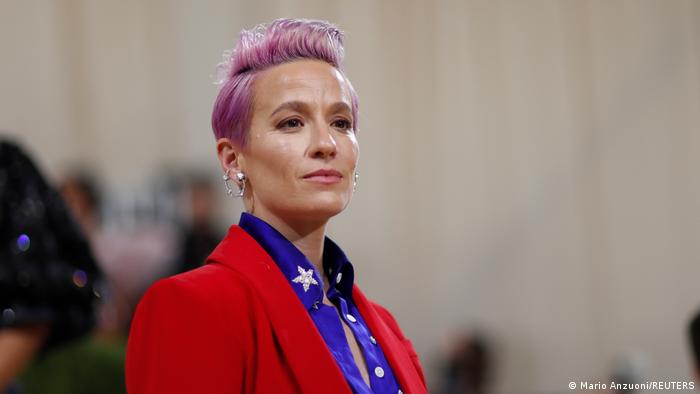 More than 500 female athletes, coaches and sports associations have written to the US Supreme Court, the highest court in the US, in support of the right to abortion.

Without the right to terminate a pregnancy, "the physical stresses of forced pregnancy and childbirth would undermine athletes' ability to reach their full potential," the letter states. "Pregnancy fundamentally alters a woman's body, interferes with and potentially impedes an athlete's access to higher education, elite competition, and a professional athletic career. Female athletes must have the power to decide if and when to dedicate their bodies to sport, pregnancy or both."

Known collectively as Athlete Amici, the athletes signed a formal appeal to argue that the right to abortion is essential for women athletes to pursue their sports at the same level that men are afforded. The group urged the court to reject a Mississippi law that would ban
most abortions after 15 weeks of pregnancy.

Bird, who is married to Rapinoe, and Taurasi won Olympic gold with the US team in Tokyo. A total of 26 female Olympic athletes and 73 professional athletes supported the appeal, along with various representative bodies such as the US player unions in football and basketball.

"As female athletes and people in sports, we need to have the power to make important decisions about our bodies and have control over our reproduction," Rapinoe said. Laws restricting abortion rights were "outrageous and un-American," the 36-year-old former world footballer said.

The Supreme Court on Monday scheduled arguments in a case from the state of Mississippi for December 1. In the case, the state is seeking to reverse the US Supreme Court's landmark 1973 decision that made abortions legal nationwide. Mississippi wants to ban all abortions after the 15th week. Exceptions are to be made only for medical emergencies or in the case of "severe foetal abnormalities."

Mississippi's state government had tightened the course on abortion rights after conservative jurist Amy Coney Barrett was appointed to the Supreme Court last year shortly before President Donald Trump was voted out of office. She gave the conservatives a majority of six votes to three in the Supreme Court.