Turkey has called on the courts to outlaw the left-wing pro-Kurdish HDP after years of repression against them. The US State Department has said the move will "undermine democracy." 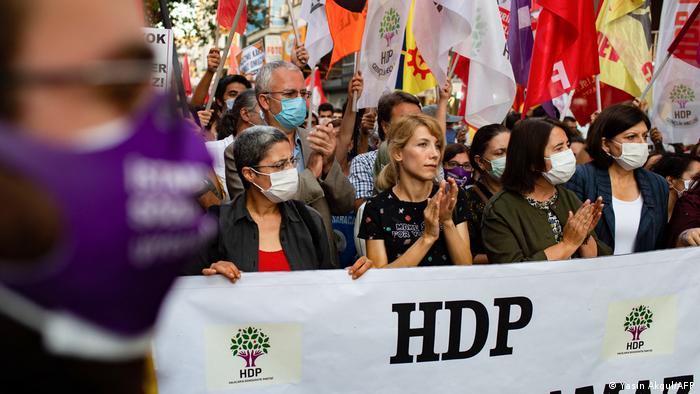 The US called on Turkey to respect freedom of expression on Wednesday evening as a Turkish court considered a request to dissolve the People's Democratic Party (HDP).

The State Department said the US was closely monitoring events in Turkey, including "troubling moves on March 17 to strip Member of Parliament Omer Faruk Gergerlioglu of his parliamentary seat."

The planned dissolution of the pro-Kurdish HDP, under charges of links with the outlawed Kurdistan Workers' Party (PKK), "would unduly subvert the will of Turkish voters, further undermine democracy in Turkey, and deny millions of Turkish citizens their chosen representation," the State Department said.

Turkey's Foreign Ministry rejected the statement saying: "Everyone must wait for the ruling the Constitutional Court will make in this process. Commenting on an ongoing judicial process amounts to intervention in the judiciary."

The EU's rapporteur on Turkey, Nacho Sanchez Amor, also criticized the move saying: "Unapologetically (moving) towards the end of pluralism. What reaction does Turkey expect now from the European Union? A positive agenda?" Turkey has been a candidate for EU membership but the process has been stalled for years.

What is the HDP?

The HDP was founded in the southeastern Kurdish region of Turkey in 2012. Its popularity spread across the country allowing it to pass the 10% hurdle in the 2015 general elections and enter parliament. That initially prevented President Recep Tayyip Erdogan's Justice and Development Party (AKP) from obtaining a majority.

The HDP gained widespread popularity as one of the country's more progressive parties but drew the ire of Erdogan who has continuously connected the HDP with the PKK.

HDP leader Selahattin Demirtas and nine other HDP members of parliament were arrested in 2016 after the Turkish parliament removed immunity for lawmakers. He was charged with 33 counts, including leading a terrorist organization and instigating violence against the Turkish state.

Prosecutors are seeking a jail term of 142 years. The European Court of Human Rights has called his detention illegal and demanded his immediate release.

Why does Erdogan want to ban the HDP?

The prosecution against the HDP said the party was "acting as an arm of the PKK" and "attempting to disrupt the unity and territorial integrity of the state."

Despite attempts by Erdogan and the AKP to pursue a more moderate approach towards the country's Kurdish minority when they first came to power, an increasingly nationalistic trend has drawn the government into open conflict with Kurdish militants.

However, Turkey's crackdown against HDP politicians and mayors since 2019 was described as undue repression by the European Union last month.

The leader of Turkey's Nationalist Movement Party (MHP) Devlet Bahceli — and an ally of Erdogan — welcomed the dissolution of the pro-Kurdish party on Thursday, saying the party should be closed down "never to be opened again," Reuters reported.

Turkey is pushing ahead with a trial against opposition lawmakers despite an international outcry. Germany's human rights commissioner has reiterated calls for the release of former HDP leader Selahattin Demirtas.