Republicans have put conservative Amy Coney Barrett on the high court, just days before a presidential election. Democrats, meanwhile, have been reduced to the role of helpless onlookers. 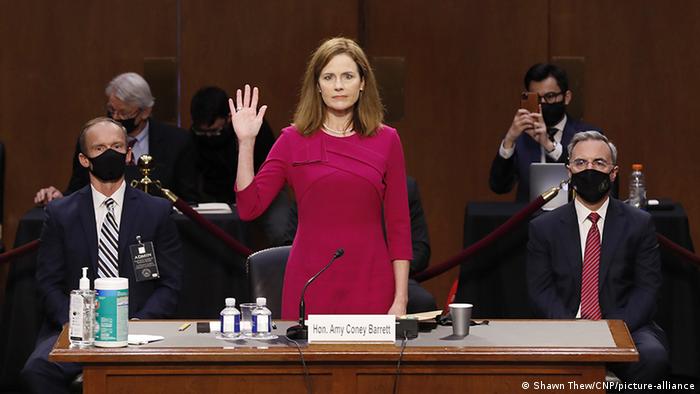 The US Senate confirmed Amy Coney Barrett to the Supreme Court late Monday. Her appointment to the seat once filled by Justice Ruth Bader Ginsburg came over vocal complaints and lengthy speeches from Democrats. The deeply divided chamber voted 52 to 48, largely along party lines, with only one Republican senator, Susan Collins, siding with the Democrats.

Republican lawmakers broke into applause as the tally was read aloud.

No Supreme Court vacancy had ever been filled this close to a presidential election and Judge Amy Coney Barrett, a conservative Catholic, could cement a 6-3 conservative majority on the bench for years or even decades.

With Republicans holding a 53-47 majority in the Senate — and with rule changes requiring a simple majority rather than a 60-vote threshold (engineered early in the Trump presidency by Senate Majority Leader Mitch McConnell after Democrats began similar tinkering, seeking to bypass Republican opposition during the Obama presidency) — Coney Barrett's lifetime appointment to the bench seemed all but certain.

Coney Barrett is President Donald Trump's third Supreme Court appointment and gives him a much-needed political victory just days before the election — potentially energizing conservative and evangelical voters much like a Republican refusal to vote on Merrick Garland, President Barack Obama's nominee Supreme Court nominee to replace Justice Antonin Scalia, did back in 2016.

Who is Amy Coney Barrett?

Read more:  Opinion: Donald Trump opts for a lurch to the right in the Supreme Court

Trump hailed Barrett's confirmation as "a momentous day for America."

"This is a momentous day for America, for the United States Constitution and for the fair and impartial rule of law," the president, standing alongside Barrett, said before beaming lawmakers and others who had gathered on the South Lawn of the White House.

Chief Justice John Roberts will administer a separate judicial oath to Barrett on Tuesday, allowing her to formally take a seat as a justice on the Supreme Court, the top judicial body said in a statement.

At the time, Republicans said it would be unfair to make a lifetime appointment in a presidential election year, citing a desire to let the people decide such an important issue. That was 10 months before an election, now, less than 10 days before the next one, Republicans were called out for the rank hypocrisy of pushing Barrett's candidacy through in a month's time, during a raging national health crisis and in the final stretch of an election campaign.

The difference between now and then? In 2016, the Republican opposition controlled the Senate and so could block Obama's appointment, while the GOP retains Senate control now with Trump in office.

McConnell himself underscored the importance of the battle — which could have far-reaching consequences for women's reproductive rights, the future of healthcare, the environment and presidential power — noting that unlike legislation, Democrats "won't be able to do much about this for a long time to come."

Though Trump has said he wants Barrett on the Supreme Court in case the bench has to decide an election winner, the weightier issue she will address will come on November 10, when Republican-led states will seek to finally deal a death blow to the Affordable Care Act, more commonly known as Obamacare. The court's decision will determine whether millions keep their health insurance and whether patients with pre-existing conditions can be denied coverage.

US begins 3 days of tributes to Justice Ruth Bader Ginsburg

Coronavirus cases keep piling up at the White House, in the wake of Donald Trump's positive test. The outbreak has reached Republicans in the Senate and thrown Trump's presidential campaign into disarray.