US sanctions on Africa need an overhaul, say experts

Washington plans to lift sanctions on Sudan in return for compensation for terror victims, making the African country a pawn in the US election campaign. Experts say this approach to sanctions in Africa needs to change.

President Donald Trump has said the United States will begin removing Sudan from a list of state sponsors of terrorism  once the African nation follows through on its pledge to pay $335 million (€283 million) to American terror victims and their families.

Sudan's central bank said the funds had been deposited into a special account on Tuesday for victims of al-Qaida attacks on US Embassies in Kenya and Tanzania in 1998.

The move is part of broader deal that could bring necessary international loans and emergency financing to revive Sudan's battered economy and help the country's transition to democracy.

The US, under the administration of former President Barack Obama, lifted most economic sanctions against Sudan in 2017 but retained the sanctions related to the country's listing on the state sponsors of terrorism list.

There are reports that taking Sudan off the blacklist may also be dependent on the country normalizing relations with Israel — something which is expected to be announced in the coming days, according to Israeli media.

Having more countries recognize Israel has been one of Trump's diplomatic goals ahead of the US presidential election on November 3. But this objective has nothing to do with the original reason for imposing the sanctions, said Theodore Murphy, director of the Africa program at the European Council for Foreign Relations (ECFR).

"The reason for the sanctions was originally terrorism," he told DW. "That doesn't have anything to do with the recognition of Israel."

Maintaining the remaining sanctions against Sudan contradicts Washington's stated goal of supporting the country's democratic transition after the ouster of longtime autocratic president Omar al-Bashir in April 2019. As long as Sudan remains on the terror list, however, access to those much-needed investors will stay away.

US sanctions against 9 African nations

The example of Sudan illustrates the vagaries of the US sanctions policy in the region.

As well as Sudan, eight other African countries are on the US Treasury Department's sanctions list, including Burundi, Congo, Mali, Libya, Zimbabwe, Somalia, South Sudan and the Central African Republic.

These sanctions, mainly against individuals or companies and organizations, are for human rights violations or for fueling conflict. They include asset freezes, as well as bans on travel or cooperation with international partners like the EU.

Independently from sanctions on states, the US can sanction individuals under the Global Magnitsky Act, which targets corrupt officials and practices and human rights violations. African citizens on the list include Yahya Jammeh, the former president of Gambia from 1996 to 2017, and his wife Zeinab, as well as South Sudanese politician Taban Deng Gai.

Some 141 individuals and companies in Zimbabwe, including current President Emmerson Mnangagwa, are currently under US sanctions. Oddly enough, one of those on the US sanctions list is long-term ruler Robert Mugabe, who died in 2019. 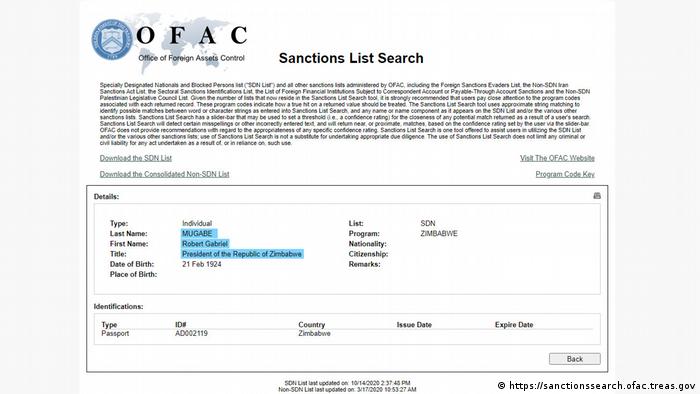 First imposed in 2003, the Zimbabwe sanction program is one of Washington's most unsuccessful, according to Hilary Mossberg, an anti-money laundering expert at The Sentry, which tracks dirty money from Africa.

The sanctions have "simply not been effective" in changing the attitudes or behavior of Zimbabwe's political elite, she told DW.

The Zimbabwean government has developed such as strong rhetoric against the sanctions that the measures have "lost every momentum they might have had years ago," Mossberg said.

Zimbabwe's Foreign Minister Sibusiso Moyo described the US sanctions against his country as a "weapon of mass destruction" in an interview with DW in July. However, others have said there is little evidence to prove that US sanctions were responsible for Zimbabwe's woes. Instead, they've pinned the country's economic problems on government mismanagement.

Despite the modest balance sheet, Trump extended the sanctions on Zimbabwe in March 2020 by a year. He said Zimbabwe's new government, which came to power after Mugabe was ousted in late 2017, posed an "unusual and extraordinary" threat to the US.

According to Mossberg, US sanctions have been more effective in Congo.

Washington first imposed sanctions on Congo in 2006, under the rule of President Joseph Kabila, because of "widespread violence and atrocities."

It subsequently increased the range and severity of the measures, and subjected individuals to the Magnitsky Act — which may have influenced Kabila not to stand for reelection in 2018.

"I am not saying that the sanctions were the only reason why President Kabila didn't run again," said Mossberg. But, she added, research has shown the US sanctions were part of the reason. 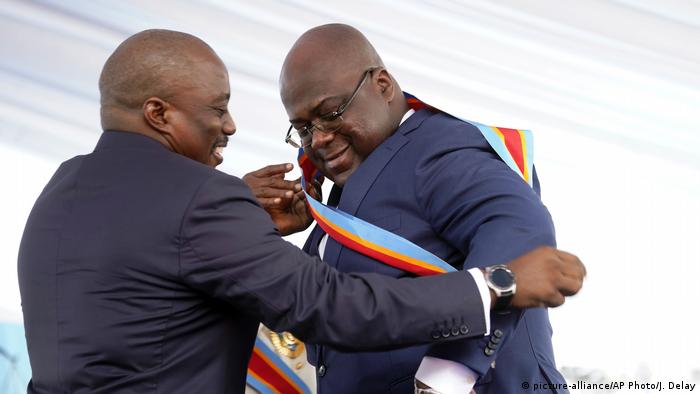 Despite signs of a recent rapprochement between the US and Congo under new President Felix Tshisekedi, sanctions are still in force against 55 individuals, companies and organizations, along with those subject to the Magnitsky Act. Research by The Sentry has shown that the US failed to maintain pressure on Kabila when Trump took over from Obama in 2017.

"I don't think we're at the point of lifting sanctions," said Mossberg. "Too many people close to Kabila are still in positions of power."

US sanctions could do more

Solidarity with the United Nations or the European Union would make US sanctions much more effective, said Mossberg, pointing out that Zimbabwe is an example of a lack of international strategy.

"Our main recommendation for the United States is to concentrate on multilateral efforts instead of going it alone, which is so typical for the US," she said.

Her organization, The Sentry, has also recommended using network sanctions, which target people who operate on a sanctioned individual's behalf or those who provide support that enables a regime to stay in power.

In addition, said Mossberg, there should be a clearly defined exit strategy setting out the necessary criteria for sanctions to be lifted, to avoid cases such as the current situation with Sudan.

Murphy of the ECFR pointed out that the US sanctions policy isn't part of a larger strategy for Africa on the part of the US government. To a certain extent, however, specific sanctions have depended on the president, his priorities, the people has chosen to fill crucial posts and the number of personnel assigned to relevant departments, he said.

Should there be another change in the White House on November 3, Mossberg expects a more strategic approach Trump's Democratic challenger, Joe Biden.