The new US defense secretary appeared wearing a German flag on his lapel, heaping praise on Berlin's troops. It was the second meeting by a German minister with the new US administration.

She said following the meeting that Mattis had expressed a clear and deep commitment to the North Atlantic Treaty Organization and that it was "a fair demand" for the US to request NATO partners to increase their share of funding.

She told reporters she welcomed an offer from Mattis to deepen the strategic dialogue between Berlin and Washington. She said the two agreed that many global problems could not be solved without Russia but that Moscow also needed to respect international law and the borders of other sovereign countries.

Von der Leyen said fighting terrorism was "a key priority" for both Germany and the United States.

Wearing a pin in his lapel with the US and German flags, Mattis expressed "high regard for Germany as an ally ... It's always stood the test of time, the test of any challenge."

"In my previous roles, I have served with your forces many times, and I would just tell you I have the highest regard for them," he added. 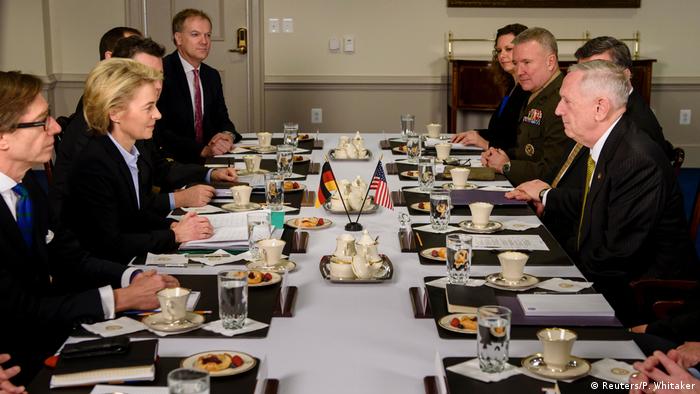 Friendship between the two countries

Von der Leyen said her early visit to the Pentagon, just three weeks after the inauguration of President Donald Trump was "a very strong sign for the depth of our relationship and the long-lasting German-American friendship."

US President Donald Trump had repeatedly voiced strong doubts about NATO during the presidential campaign, but he later expressed his commitment to the alliance. Von der Leyen said the alliance had "come a long way, but needs to progress further."

She told Mattis that the United States needed a strong European pillar in the alliance.

Von der Leyen was the second German cabinet representative after Foreign Minister Sigmar Gabriel to visit the new US administration. Chancellor Angela Merkel is rumored to have a meeting on the books with US Vice President Mike Pence at the upcoming Munich Security Conference.

German Chancellor Angela Merkel has changed course and is now advocating a Europe of "two speeds." Her goal is to save the European project. Many do not agree with her means to the end. Max Hofmann reports from Brussels. (08.02.2017)