US President Barack Obama has reassured Persian Gulf allies of US support in the event of external aggression. Sunni Arab leaders have expressed concern about the ambitions of Iran, especially in Shiite-Sunni hotspots. 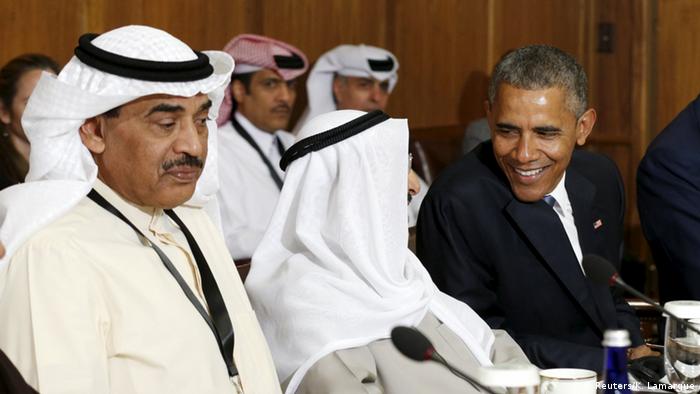 In a closing press conference after the Camp David summit meeting on Thursday, President Obama emphasized an "iron-clad commitment to the security of our Gulf partners."

Amid growing concern among Gulf Cooperation Council (GCC) leaders about Iran's regional ambitions and growing influence - particularly in light of a proposed nuclear deal between Tehran and world powers - Obama pledged to back Gulf allies against outside aggression.

"The United States is prepared to work jointly with GCC member states to deter and confront an external threat to any GCC state's territorial integrity that is inconsistent with the UN charter," he said.

He stopped short of offering a formal defense treaty, which certain Gulf countries had sought. However, he did announce more modest measures, including the streamlining of weapons sales, help to integrate ballistic missile defenses and more cooperation on military training.

A number of differences loomed over the summit, including US policy toward Tehran and disagreements over the Syrian civil war.

The Iran deal - involving Iran and the five permanent members of the Security Council plus Germany - is aimed at preventing Iran from building a nuclear weapon of its own, but would also lift sanctions against the predominantly Shiite state. Sunni neighbors fear it might embolden Iran as a series of conflicts play out - in Iraq, Lebanon, Syria and Yemen - that involve Shiite factions.

Representatives of the GCC did not endorse an emerging deal with Iran in the joint statement, but did at least acknowledge it in positive terms.

'Purpose not to marginalize'

While Obama sought to reassure, he also stressed that long-term enmity with Iran was not desirable. "I want to be very clear," he said. "The purpose of security cooperation is not to perpetuate any long-term confrontation with Iran or even to marginalize Iran."

Both Washington and Riyadh insisted the king's absence was not a snub, but signs have been growing of a strain in relations due to Iran, the rise of the "Islamic State" and the US' reduced dependency on Saudi oil.

Saudi King Salman's last-minute cancellation has overshadowed US President Barack Obama's summit with the Gulf states. The Saudis are responding to Obama's rapprochement with Iran. Gero Schliess reports from Washington. (13.05.2015)

NATO meeting: Germany hopes for continued US support in Afghanistan 39m ago

UN warns of coronavirus surge in humanitarian needs 2h ago