US President Barack Obama has arrived in Cuba for the start of a key visit and meetings with President Raul Castro. The diplomatic opening is intended to be the centerpiece of Obama's presidential legacy. 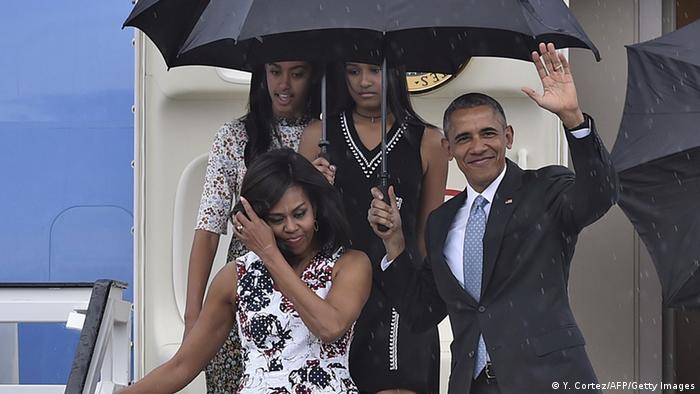 Heavy rain fell as the presidential party descended from Air Force One on Sunday at Havana's airport. Obama tweeted his arrival, asking Cubans "What's up?"

Obama was greeted by top Cuban officials - but not President Raul Castro. The leader frequently greets major world figures upon their arrival at Jose Marti International Airport, but was absent on the tarmac.

Instead, he planned to greet Obama on Monday at the Palace of the Revolution.

Obama and Castro will have their fourth meeting at the Palace of the Revolution on Monday, where Castro and his predecessor, older brother Fidel Castro, have led Cuba's resistance to US pressure going back decades.The two leaders have deep differences to discuss as they attempt to rebuild the bilateral relationship.

Obama's three-day trip marks the first US presidential visit to the Caribbean island since 1928, when President Calvin Coolidge arrived in a battleship.

The president went directly to greet staff at the new US embassy building, later joining his wife, Michelle, and two daughters for a tour of Old Havana. On Monday, Obama is scheduled to hold talks with Castro and meet with US and Cuban businesspeople.

Hours before Obama arrived in the Cuban capital, police took away dozens of demonstrators from the Ladies in White group. The wives of political prisoners meet and hold protests outside a church every week. 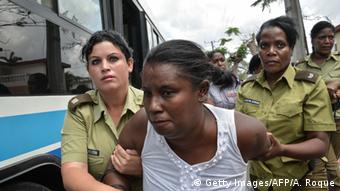 Earlier Sunday, Ladies in White demonstrators were arrested during their weekly protest

The renewal of diplomatic ties is a centerpiece of Obama's foreign policy legacy and the fulfillment of his pledge to engage directly with longtime US enemies.

Persistent differences between the US and Cuba remain, including Havana's frustration with the US economic embargo and Washington's condemnation of Cuba's human rights record.

"The more that US businesses are engaged there, the more that we have people traveling there, the more Cuban-Americans are able to interact with family members that in some cases they haven't seen in decades, the more likely we are to see the kind of changes that all of us are hoping for," Obama said in an interview with the CNN television network.

Joining Obama on his trip were 40 US lawmakers and a dozen business leaders.

Obama's schedule in Cuba is busy. It includes meetings with US and Cuban entrepreneurs as well as an all-out charm offensive to convince the Cuban public that its Cold War foe is no longer a threat.

A highlight of Obama's visit comes Tuesday when he joins the Cuban president and a crowd of Cuban baseball fans for a friendly game between Cuba's national team and Major League Baseball's Tampa Bay Rays.

The president also plans to give a speech at the Grand Theater of Havana laying out his vision for greater freedoms and economic opportunity in communist Cuba.

First came the pope, and now Obama: The US president is making a historic visit to Cuba. The process of rapprochement between the two former arch foes has advanced far enough that it cannot simply be undone. (20.03.2016)

US eases Cuban restrictions ahead of Obama visit

The United States has eased restrictions on Cuba ahead of a visit by President Barack Obama. The move is seen as part of the "Cuban Thaw." (15.03.2016)