Obama makes history with Havana visit | World| Breaking news and perspectives from around the globe | DW | 20.03.2016

First came the pope, and now Obama: The US president is making a historic visit to Cuba. The process of rapprochement between the two former arch foes has advanced far enough that it cannot simply be undone. 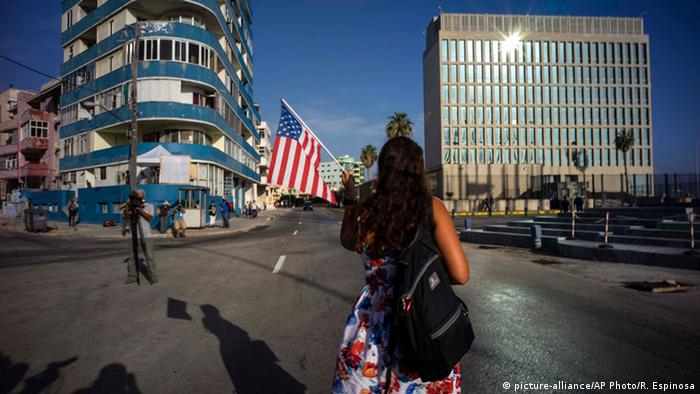 Obama's visit to Cuba marks "a historic event" for the country's people, says Cuba expert Bert Hoffmann, director of the GIGA Institute of Latin American Studies. "Older people in particular are saying: 'I never thought I'd live to see the day.'"

A US head of state is landing Sunday on the Caribbean island for the first time in 88 years. But whereas former US President Calvin Coolidge arrived in Cuba on a warship back in 1928, Barack Obama and Cuba's President Raul Castro now want to bury the hatchet.

Even ahead of the historic visit, there has been an abundance of symbolic gestures. For example, Cuba's foreign minister, Bruno Rodriguez Parrila, announced on March 18 that the fee on money transfers from the USA was to be abolished. The fee, amounting to 10 percent of the sum to be transferred, was introduced by the Havana government in 2004. Its abolition raises the income of many Cubans who are financially dependent on money sent by their relatives in the US.

Scholarship for artists from Cuba

The US is also changing laws by allowing Cuban citizens to take up a regular job during their stay; they will also be allowed to open bank accounts and receive visitor grants. In addition, the postal service between the two countries has resumed after a 48-year interruption.

"More has happened in Havana in the past one and a half years than in the five previous decades," says Hoffmann, who heads GIGA's Berlin office. He says the stream of US visitors to the island has boosted the Cuban economy, and that people there were hoping this development would continue: more Internet, more dollars, more visitors. 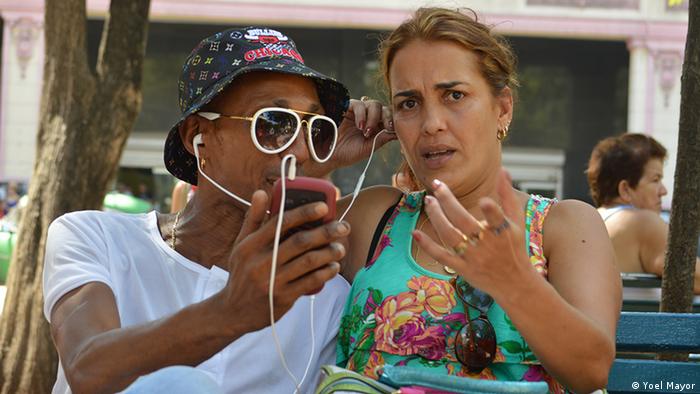 At last! In the Parque Fe del Valle in Havana, Cubans now have Wi-Fi access

But Cuba has not completely turned its back on its previous course. Just last week, Raul Castro awarded Venezuelan President Nicolas Maduro the Order of José Marti, the highest honor given by the communist government. Marduro was commended for having shown "courage and intelligence" in his opposition to a decree signed by the US in which Venezuela was described as a danger to the USA. The year-old decree was renewed by Obama at the start of March, provoking widespread condemnation from Latin American leaders.

Despite the blossoming relationship between Washington and Havana, the Cuban government is sticking by its demands. One of these has already been fulfilled: In May 2015, the USA struck Cuba from its blacklist of states that allegedly support terrorism. But the lifting of the trade embargo and the handing back of the US military base at Guantanamo Bay to Cuba are still on the to-do list.

"Raul Castro has to make these all-out demands; he is the pillar of the Cuban Revolution," says political scientist Bernd Greiner from the Hamburg Institute for Social Research. But, as Greiner told German broadcaster Südwestrundfunk, it was also clear that these demands would not be fulfilled completely as they stood. 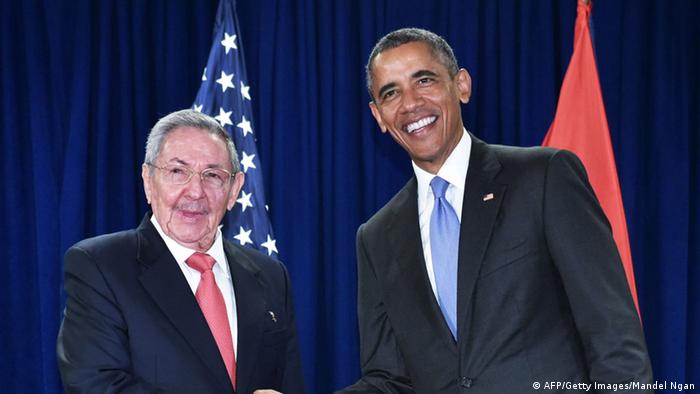 Many symbolic gestures: Presidents Castro and Obama on the sidelines of the UN General Assembly in September

The two political experts agree that Raul Castro is key to a successful rapprochement between the two countries. "It is extremely important that Raul Castro, and not his successor, receives President Obama," says Hoffmann. Otherwise, he adds, everyone would be able to say, "Fidel would never have done that." But this way, Raul Castro is able to say the same thing in the name of the revolution, "with all the historical legitimation," according to Hoffmann.

In Cuba itself, despite all the euphoria about the economic and political shift toward more openness, there is growing criticism of the increasing social inequality in the country. While restaurant or bar owners are earning big dollars from tourists, teachers and doctors in the country are left out in the cold. "The cost of living is rising rapidly," according to a piece in the oppositional magazine "Convivencia," which further reports growing violence and a problem with shortages.

Many outside of Cuba also see contradictions in the country's current political approach. "For the government, the rapprochement is not easy at all, as the Cuban Revolution receives its legitimation from its animosity toward the USA," Hoffmann says. He argues that the process of political reform at a domestic level has not gone as far as it has to, and that it is neither coherent nor transparent.

But Bert Hoffmann says he feels there is no alternative to the rapprochement with the USA. "The USA is the obvious trade partner for practically everything, given Havana's proximity to Miami," he claims, adding, "The two million Cuban-Americans in the USA alone bring more money to Cuba than the EU does."

Rock legends The Rolling Stones are set to perform at a free outdoor concert in Cuba, marking their first ever concert in the socialist country. The band is expected to arrive only days after US President Barack Obama. (01.03.2016)