The US has long warned Americans not to travel to Chad

The State Department on Saturday ordered non-essential diplomats at the US Embassy in Chad to leave the landlocked African nation due to potential insurgent attacks on the capital N'Djamena.

It also ordered the families of American personnel stationed there to leave the country.

"Armed non-governmental groups in northern Chad have moved south and appear to be heading toward N'Djamena. Due to their growing proximity to N'Djamena, and the possibility for violence in the city, non-essential US government employees have been ordered to leave Chad by commercial airline," said the department.

The department has long warned Americans not to travel to Chad because of unrest and the presence of the jihadist Boko Haram group. It said any Americans there now who wanted to leave should do so.

The UK also asked its citizens to leave Chad as soon as possible.

Meanwhile, Chad's army said that it had "completely destroyed" a column of rebels, who had attacked the northern part of the country.

"The adventure of the mercenaries from Libya ended as announced. Congratulations to our valiant defense and security forces," said Chérif Mahamat Zene, Chad's minister of communications.

Army spokesman Azem Bermandoa said that they were searching for the last of the rebels.

The UK government said on Saturday that a group of Libya-based rebels, the Front for Change and Concord in Chad (FACT) was heading towards N'Djamena and a separate convoy was seen approaching a town 220 kilometers (137 miles) north of the capital.

Last Sunday, FACT rebels said they had captured garrisons near Chad's northern borders with Niger and Libya "without resistance."

The latest assault came last Sunday, the same day as the country's presidential election, which the incumbent Idriss Deby Itno — who has ruled the country for 30 years — is expected to win. 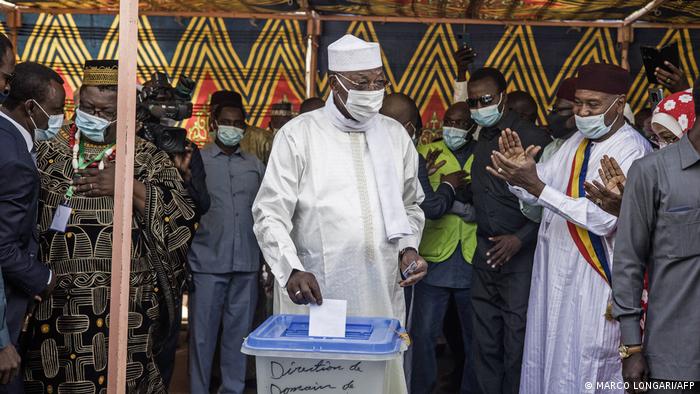 Incumbent president of Chad, Idriss Deby, took an early lead in the election held on April 11

An ally of Western powers in the fight against Islamist militants in West and Central Africa, Deby is one of Africa's longest-serving leaders, but there are signs of growing discontent over his handling of the nation's oil wealth.

Chad's government has been forced to cut back public spending in recent years because of the low price of oil, its main export, sparking labour strikes.

Opposition leaders called on their supporters to boycott the polls and make the country "ungovernable" after Deby's decision to seek a sixth term led to protests and clashes with security forces.

Deby has relied on a firm grip over state institutions and one of the region's most capable militaries to maintain power.

Reporting on conflict in the Global South