Dozens of people have protested outside the White House against visiting Mexican President Enrique Pena Nieta. The protesters were demanding justice for 43 students disappeared three months ago from the city of Iguala. 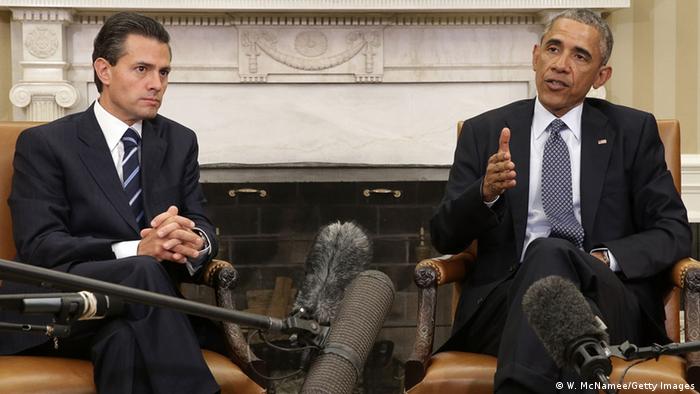 Protesters demanded the resignation of President Pena Nieto - who they accused of failing to provide justice in the case of missing students - as he met US President Barack Obama.

It is alleged the young men were massacred by a police-backed militia in Mexico's southwestern Guerrero state. The case has triggered nationwide protests for weeks.

Obama told reporters after his meeting with Pena Nieto that the tragedy had raised concerns about the security situation in Mexico.

"Our commitment is to be a friend and supporter of Mexico in its efforts to eliminate the scourge of violence and the drug cartels that are responsible for so much tragedy inside Mexico," Obama said, adding that it would ultimately be up to the Mexican law enforcing agencies to bring the culprits to justice.

On Monday, Maria de los Angeles Pineda, the wife of former mayor of Iguala, was jailed for her alleged role.

The students of a teacher training college in the Guerrero state went missing on September 26 after they were allegedly abducted by police in the city of Iguala. The police handed them over to hitmen from a local gang who the authorities say killed the students. They then allegedly burned the bodies.

Public prosecutors say the police acted on an order from the mayor of Iguala, who is among dozens of suspects arrested in connection with the disappearances.