US media: Trump to cut climate programs at EPA and NOAA

Donald Trump has called for cuts to an agency that monitors the climate, US media report. His administration also seeks to slash programs aimed at slowing projected environmental disaster. 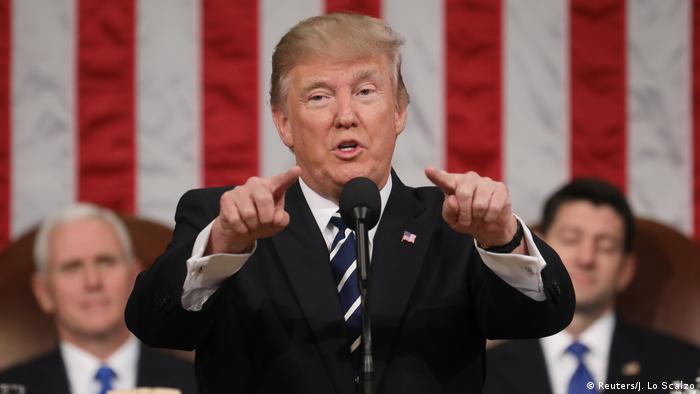 US President Donald Trump has proposed reducing the budget of the National Oceanic and Atmospheric Administration, the Washington Post reported. The cuts to the NOAA could affect research, eliminate smaller initiatives and leave 3,000 people out of work.

The Commerce Department agency "would be hit by an overall 18 percent reduction," the Post reports. NOAA's satellite data division would lose 22 percent of its funding, or $513 million (483 million euros). However, an unnamed White House official cautioned the paper against reporting specific numbers during the "evolving" process.

The AP reports that Trump plans to reduce the Environmental Protection Agency's staff by 20 percent now that campaign loyalist Scott Pruitt - who sued the EPA over regulations 14 times as Oklahoma's attorney general - has taken charge. Trump plans to fund beefed-up military spending through massive cuts to domestic agencies and departments. He plans to submit his budget to Congress during the week of March 13.

On Twitter, the environmental watchdog Friends of the Earth compared Trump's climate agency cuts to the science fiction rampage of the man-made monster Godzilla and called on congressional Democrats to stand up to the US president.

The New York Times reports deep divisions within the president's team ahead of an imminent decision on the US's participation in the Paris agreement. Energy and government officials told the newspaper that senior adviser Steve Bannon has pressed Trump to quit the historic agreement, which 194 countries reached in December 2015 to fight global warming by reducing greenhouse gas emissions.

Former ExxonMobil CEO and current US Secretary of State Rex Tillerson has rejected Bannon's position, the Times reports, as has Trump's more influential daughter, Ivanka. They expressed concern that quitting the accord, negotiated under former President Barack Obama, would weaken the US's credibility abroad and hurt ties with major allies.

The exit of the United States - the world's biggest economy and the second-largest emitter of carbon dioxide after China - from the Paris agreement could prove a major blow to efforts to combat climate change. Although Trump cannot unilaterally withdraw the United States from the accord, he can initiate the process for the US's noncompliance. That would show Trump's supporters that he intends to keep his promises to prop up the US coal industry.

Trump plans to begin dismantling Obama-era regulations that require power plants to reduce carbon dioxide emissions. Those restrictions would have proved key to the US's meeting its international climate commitments.