Trump prepares to dismantle US environmental law | Environment | All topics from climate change to conservation | DW | 10.11.2016

President-elect Donald Trump has chosen a well-known climate skeptic to oversee the transition of the country's Environmental Protection Agency. The Republican Party has pledged to shut down the regulatory entity. 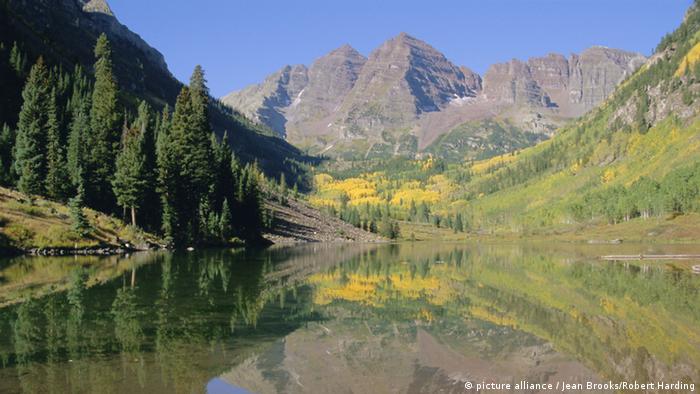 Two days after the election of Donald Trump as US president, arrangements are already underway to fulfill the Republican Party's promise to kill the American agency implementing environmental regulations.

According to media reports, Trump has selected one of the country's best-known climate skeptics, Myron Ebell, to lead his transition team for the Environmental Protection Agency (EPA), which administers almost all environment and climate law in the US. The team will coordinate with the existing agency management until Trump assumes office on 20 January.

Ebell is chairman of the Cooler Heads Coalition, a group of nonprofits that "question global warming alarmism and oppose energy-rationing policies." He frequently appears in media and has testified before congress as a doubter of the existence of man-made climate change. He was once the subject of a censure motion in the British House of Commons after he criticized the UK's chief scientific adviser for his views on global warming, according to his biography.

Ebell's main mission may be to dismantle the organization he is selected to lead. 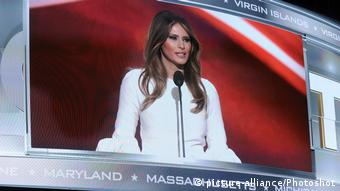 The Republican Party platform, adopted at the party convention in July, promises to dismantle the EPA and transform it into an "independent bipartisan commission similar to the nuclear regulatory commission". The EPA was set up by Republican President Richard Nixon in 1970.

The platform, which laid out promises for a future President Trump and a Republican Congress, pledges to end limits on CO2 emissions, pull the US out of the UN climate process, open protected forests to logging and end all subsidies to renewable energy. Republicans won control of both houses of congress in this week's election.

Erich Pica, the president of Friends of the Earth US, has called it "one of the most anti-environmental platforms we have ever seen".

The Republican Party platform accuses the Democratic administration of outgoing President Barack Obama of having a "radical anti-coal agenda".

"The Democratic Party does not understand that coal is an abundant, clean, affordable, reliable domestic energy resource," it states.

"The environmental establishment has become a self-serving elite, stuck in the mindset of the 1970s," the platform states. "Their approach is based on shoddy science, scare tactics, and centralized command-and-control regulation."

The Republicans also plan to repeal Obama's Clean Power Plan, the main instrument for controlling carbon emissions from power plants. Without this plan, it would be impossible for the US to meet its emissions reduction commitments under the Paris accord. 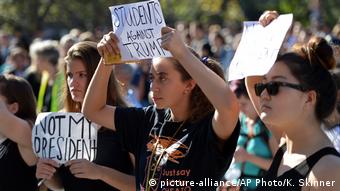 The US has been rocked by protests following the Trump win

The plan is to strip the EPA of any power to limit carbon emissions, according to the Republican platform. It does not envision replacing these regulatory instruments with any new limits on emissions such as market-based mechanisms, stating merely "we oppose any carbon tax."

The Republicans will take a technology-neutral approach, forbidding subsidies to any renewable energy technologies, which should only receive private funding.

"We support the development of all forms of energy that are marketable in a free economy without subsidies, including coal, oil, natural gas, nuclear power and hydropower," the document states.

"Unelected bureaucrats must be stopped from furthering the Democratic Party's agenda," the Republicans argue. To that end, nature protection rules administered by the EPA, an executive agency, should be either ended or transferred to the authority of individual states.

Additionally, the reach of the Endangered Species Act should be significantly curtailed, Republicans argue, so that species cannot be listed as endangered in one location if they exist in healthy numbers in another location.

The act has "stunted economic development, halted the construction of projects and burdened landowners," the platform states.

The 200 million acres of land protected by the federal government should be "used to the best economic potential for the nation," particularly with regard to logging timber, the Republicans argue.

Public lands should be opened to oil and gas exploration, including land in America's outer continental shelf. Permission for such exploration, and for mineral extraction, should be expedited.

Trump has promised several times to pull the US out of the global deal to limit emissions agreed in Paris last year and signed into law by President Barack Obama.

This pledge is also made in the Republican platform, which goes even further in calling for  an "immediate halt to US funding" for the UN Framework Convention on Climate Change (UNFCCC), which organizes the yearly climate summits and monitors countries' progress. It also proposes to ban scientific studies coming from the UN's intergovernmental panel on climate change from being used as a basis for US lawmaking. 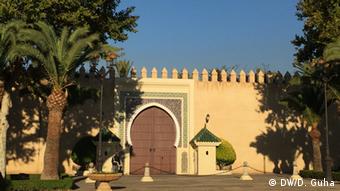 A UN climate summit is taking place in Marrakesh, Morocco

Because of President Obama's speedy ratification, it would be possible for Trump to pull the US out of the deal. Also, since there is no punishment for non-compliance, Trump could simply not abide by the rules of the pact. The Chinese government has already suggested that if the US does not meet its end of the bargain, neither will China. Delegates are currently meeting at this year's summit in Marrakesh, Morocco, and Trump's victory has thrown the summit into uncertainty.

Fred Krupp president of the Environmental Defense Fund, said Trump's election "has profoundly altered the landscape in which we work."

Annette Loske, president of the European chapter of the International Federation of Industrial Energy Consumers, warned at the summit that European industries will resist measures that fight climate change if their competitors in the United States are not participating. She said the combat against global warming will be impossible if the US doesn't participate.

Wilfred D'Costa from the Asian Peoples Movement on Debt and Development, said that "for communities in the global south, the US citizens' choice to elect Donald Trump seems like a death sentence".

"That a climate change denier can be elected as the most powerful man in the world will make efforts to reduce emissions and secure adequate funding for adaptation measures all the more difficult," said Sabine Minninger, climate advisor for Brot für die Welt.

The talks in Marrakesh will continue for another week.