A US court has ruled that a Spanish museum legally purchased a prized French Impressionist painting looted by Nazis. The judge criticized Spain for not following "moral commitments" to return the Camille Pissarro work. 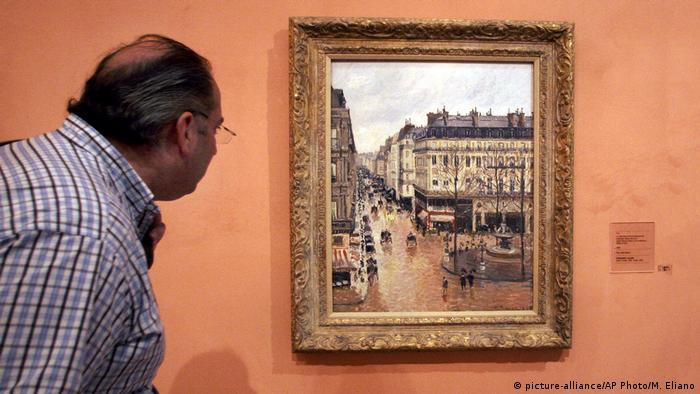 Spain's Thyssen-Bornemisza Museum has won a long legal battle in the US to keep a painting which was surrendered by a Jewish woman in 1939 so she could leave Nazi Germany.

A federal judge in Los Angeles ruled that there was no evidence the Madrid museum knew the painting by French Impressionist Camille Pissarro was looted art when it acquired the work along with others in 1993 from German industrialist Baron Hans-Heinrich Thyssen-Bornemisza.

"The court concludes, based on all of the evidence, that TBC acquired lawful ownership" under Spanish law that applies in the case, US District Judge John F. Walter ruled.

However, the federal judge wrote in a 34-page ruling that although the deceased Baron did not have knowledge the painting was stolen, as a sophisticated art collector he had not carried out sufficient due diligence when he had purchased the painting in 1976.

There were "red flags" around the provenance of the painting due to missing labels from the back of the canvas, the court found.

But the court said that even if the museum or the Baron had conducted an investigation, they would likely not have been able to trace the original ownership.

Read more: Why the origins of artworks are so important

The painting was not listed in catalogues of Nazi stolen art, had exchanged hands multiple times, and the owner of the painting and heirs had not attempted to find it between 1958 and 1999 because they believed it had been lost or destroyed during World War II, the court found.

Sold and resold before discovery

The masterpiece was purchased in 1900 by the father-in-law of Lilly Cassirer, who inherited it. She sold it below market value to a Nazi art appraiser in 1939 to receive an exit visa to flee Nazi Germany. In 1958, the German government paid her the assessed value at the time, $13,000, in reparations.

The painting was sold and resold multiple times before the Baron acquired it in 1976. Then in 1999 a friend of her grandson, Claude, discovered it was in the Thyssen-Bornemisza in Madrid. This was several years after a nonprofit foundation funded by Spain had purchased the Baron's entire collection of hundreds of artworks for $350 million.

Despite the ruling, Judge Walter criticized Spain for being "inconsistent" and not following its "moral commitments" under nonbinding international agreements to return Nazi-looted art.

A Paris court has ordered a US couple to return a Pissarro painting that was looted during WWII to the family of a Jewish art collector. Although the couple purchased it in good faith, the sale was void, the judge said. (08.11.2017)

While the Bern exhibition focuses on "degenerate art," the Bonn show includes mainly Nazi-looted artworks or those of questionable provenance. The works from Cornelius Gurlitt's estate have caused ownership controversy. (02.11.2017)