A Paris court has ordered a US couple to return a Pissarro painting that was looted during WWII to the family of a Jewish art collector. Although the couple purchased it in good faith, the sale was void, the judge said. 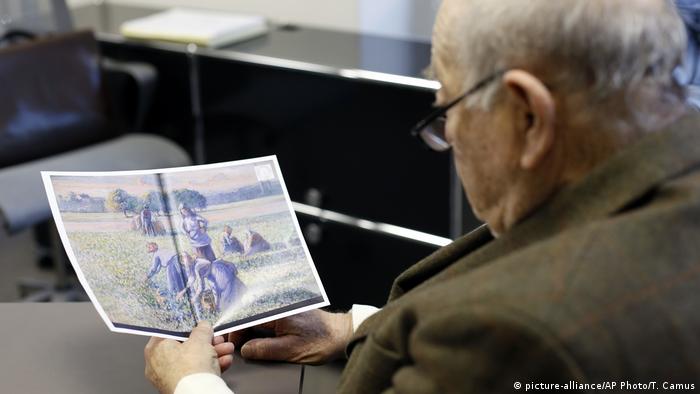 Jean-Jacques Bauer, one of the original owner's descendants, said he was 'pleased' with the court's decision

A painting by Impressionist master Camille Pissarro should be returned to the family of a Jewish art collector after it was snatched during World War II, a French court ruled on Tuesday.

The painting, "La Cueillette des Pois" or "Pea Harvest," belonged to Simon Bauer, a wealthy French businessman whose assets were seized in 1943 by the Nazi-allied, anti-Semitic French Vichy regime.

The court ruled in favor of Bauer's descendants on Tuesday, saying US citizens Bruce and Robbi Toll, who had purchased the painting at an auction in New York City, should return it.

The couple purchased the painting from a Christie's auction in 1995 for $800,000 (worth around $1.3 million or €1.1 million today). The couple loaned the painting to the Marmottan Museum in Paris earlier this year, which is where it came to the attention of Bauer's descendants.

US couple to appeal ruling

The judge in the case noted that the Tolls did not act in bad faith when the purchased the painting, but all sales of Nazi or Vichy regime-looted goods are void.

The couple's lawyer argued that the Tolls were unaware of the painting's history when they purchased it — a position upheld by the court.

"My clients will be very disappointed not to be able to retrieve this painting. They were very attached to it. They will certainly appeal," the couple's lawyer Ron Soffer said.

The judge did not award any financial compensation for the Tolls and ordered them to pay €8,000 in court costs to the Bauers.

"They do not consider that it is up to them to pay for the crimes of the Vichy regime," Soffer said.

Last month, the couple testified in an emotional trial that they were Jewish and "very sensitive" to the memory of the Holocaust.

Bauer's last surviving grandson, Jean-Jacques Bauer, 88, said he was "pleased" with the ruling and that the decision was "normal."

Bauer's grandfather, who made his fortune in the shoe industry, managed to escape while being deported to Nazi concentration camps due to a train drivers' strike. He passed away two years after the end of the war in 1947.

Tuesday's ruling is in line with previous legal decisions over art looted from Jews by the Nazis, some of which was later sold to owners who did not know the artwork's history.

A 2011 raid on an apartment in Munich, Germany uncovered hundreds of priceless paintings that had been stolen by the Nazis. The apartment belonged to Cornelius Gurlitt, a man whose father was one of four art dealers tasked by the Nazis with selling the looted artworks.

The works from the "Gurlitt collection" are currently on display in Bonn.